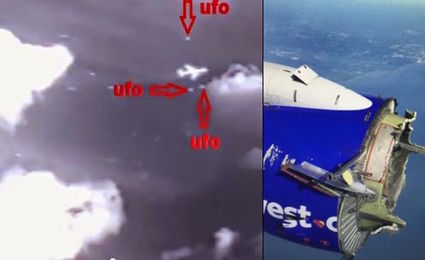 Southwest airlines 737 Boeing experiences major blowout during flight. Was this damage caused by a UFO encounter? Inset is a famous photo allegedly of Malaysia Airlines flight MH-370, with unexplained UFO's nearby.

A Southwest Airlines Boeing 737-700 flying from New Orleans to Orlando, Florida, made an emergency landing Saturday morning due to an apparent major blowout of one of its two engines. What caused such extensive engine damage? Why didn't Flight 3472 crash?

Some of the passengers onboard Flight 3472 report missing time. They reported on twitter that every watch on the plane was off New Orleans time by 4 minutes. Those who study alleged alien abductions say, usually, explicit memories of the abduction experience will not be present, and the abductee will only realize they have experienced "missing time" upon checking a timepiece.

One episode of the Fox show The X Files, centers on an jet which is halted midair by aliens, trapped in their tractor beam as they freeze time and human technology. Watches and other human equipment freezes. Then the airplane crashes. https://en.wikipedia.org/wiki/Tempus_Fugit_%28The_X-Files%29

Flight 3472 was diverted to Pensacola, Florida, after the pilot detected fire in one of his engines, according to a Southwest statement. It is undeniable that Flight 3472 was on it's way to the Bermuda Triangle, the site of many unexplained occurrences. https://en.wikipedia.org/wiki/Bermuda_Triangle. The jet landed in Pensacola around 9:40 a.m. CDT with no injuries to the 99 passengers or 5 crew members on board, Southwest Airlines Spokesmen said.

At least one passenger tweeted about an unexplained light or lights he saw moving in the distance, from the 737, just before the incident began.

Pictures taken from the plane and posted online made it appear that part of the engine had blown apart, but Southwest spokesman Chris Mainz said there was no explosion. He said Southwest will work with investigators from the National Transportation Safety Board to determine the cause.

It's rare for Southwest or any other major airline to have such serious engine trouble, said Michael Boyd, president of airline consulting firm Boyd International.

"It's a one-off, almost unheard of," Boyd said Saturday. "Southwest has an outstanding safety record because it spends a lot of money on maintenance. It's a mystery, why the engine would be in this condition," he said. A mystery, indeed.

After making the emergency landing, the plane was taken out of service. Southwest said it was trying to find alternative way to get the passengers aboard the flight to their destinations.

There are cases where passenger planes are thought by some to have been diverted or abducted by aliens. Malaysia Airlines Flight MH-370 disappeared on 8 March 2014, after departing from Kuala Lumpur for Beijing with 239 passengers and crew members on board. Nothing has been proven, but A poll posted on CNN's website reported that 9% of respondents thought it was either very or somewhat likely that the plane was abducted by aliens, "time travelers or beings from another dimension".

The poll, which has since been removed from the website, led to CNN being criticised by Perez Hilton for "indulg(ing) any wackadoo theory that might be good for TV ratings or internet clicks!" But then again, there are those suggestive stallite photos.

The Boeing 737 is an American short- to medium-range twinjet narrow-body airliner. Originally developed as a shorter, lower-cost twin-engine airliner derived from Boeing's 707 and 727, the 737 has developed into a family of ten passenger models with capacities from 85 to 215 passengers. The 737 is Boeing's only narrow-body airliner in production, with the 737 Next Generation (-700, -800, and -900ER) variants currently being built. Production has also begun on the re-engined and redesigned 737 MAX, which is set to enter service in 2017.

Originally envisioned in 1964, the initial 737-100 made its first flight in April 1967 and entered airline service in February 1968 at Lufthansa. Next, the lengthened 737-200 entered service in April 1968. In the 1980s Boeing launched the -300, -400, and -500 models, subsequently referred to as the Boeing 737 Classic series. The 737 Classics added capacity and incorporated CFM56 turbofan engines along with wing improvements. 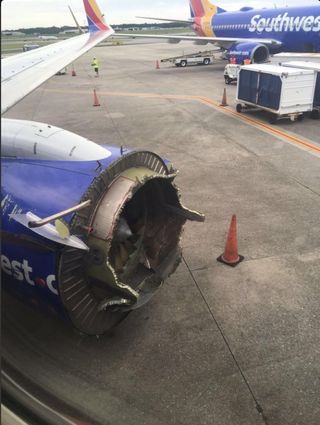 Southwest airlines 737 Boeing experiences major blowout during flight. Was this damage caused by a UFO encounter?

The 737 series is the best-selling jet commercial airliner. The 737 has been continuously manufactured by Boeing since 1967 with 9,129 aircraft delivered and 4,404 orders yet to be fulfilled as of July 2016.

737 assembly is centered at the Boeing Renton Factory in Renton, Washington. Many 737s serve markets previously filled by 707, 727, 757, DC-9, and MD-80/MD-90 airliners, and the aircraft currently competes primarily with the Airbus A320 family. As of 2006, there were an average of 1,250 Boeing 737s airborne at any given time, with two departing or landing somewhere every five seconds.