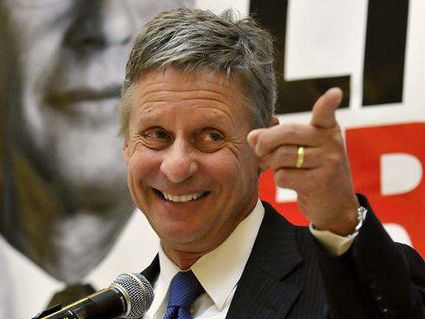 Update, 9/16: The Commission on Presidential Debates has announced that only Donald Trump and Hillary Clinton, will participate in the presidential debate on September 26th.

A CBS news poll of Ohio put the former New Mexico Governor at 10%, but Ohio is an important swing state and it means he could be a factor in the election.

The Johnson-Weld campaign took out a full-page ad in today's New York Times, asking the commission to at least allow Johnson to participate in the first debate and then take a national poll. Sounds good to me.

A minority of Libertarian party regulars think it is a mistake for Johnson to participate in the debate, given that he can make mistakes as bad as he did last week, when he did not know that Aleppo is a city in Syria at the epicenter of the Civil War.

Ironically, the gaffe appears to have given Johnson and his running mate Bill Weld, the former Republican governor of Massachusetts, a boost in the polls. Johnson was on every cable news network last week on able to remember what Aleppo was on MSNBC.

Facebook users generated 8.1 million likes, comments, shares and posts about Johnson in the week ending Sept. 11, more than double the 4 million interactions a week he had been averaging for the past month. This according to USA TODAY, http://www.usatoday.com/story/news/politics/onpolitics/2016/09/14/gary-johnson-facebook-traffic-aleppo/90349664/

The only week this year in which Johnson has generated more Facebook traffic was the end of July, when he was a fixture on TV talking about his candidacy as an alternative to the two major parties that were staging their conventions.

This seems to disprove the axiom that all press is good press. While it is true everybody was talking about Johnson, it is a good bet that not all of that chatter was praise.

If elected, Gary Johnson would be the third president Johnson after one each in the 19th and 20th century. What does Johnson actually believe in?

Johnson's views have been described as fiscally conservative and socially liberal[112] with a philosophy of limited government[113] and military non-interventionism.[114][115] He has identified as a classical liberal.[116] Johnson has said he favors simplifying and reducing taxes.[117] During his governorship, Johnson cut taxes fourteen times and never increased them.[118] Due to his stance on taxes, political pundit David Weigel described him as "the original Tea Party candidate."[119] Johnson has advocated the FairTax, a proposal which would abolish all federal income, corporate and capital gains taxes, and replace them with a 23% tax on consumption of all non-essential goods, while providing a regressive rebate to households according to household size, regardless of income level. He has argued that this would ensure transparency in the tax system and incentivize the private sector to create "tens of millions of jobs."[120] In June 2016, Johnson said that he supported the Trans-Pacific Partnership, stating that he previously thought it limited fair trade, but is now informed it, in fact, fosters free trade.[121]

Johnson has said that he supports balancing the federal budget immediately.[122] He has stated he supports "slashing government spending", including Medicare, Medicaid, and Social Security,[117] which would involve cutting Medicare and Medicaid by 43 percent and turning them into block grant programs, with control of spending in the hands of the states to create, in his words, "fifty laboratories of innovation."[122] He has referred to Social Security as a pyramid scheme. He has advocated passing a law allowing for state bankruptcy and expressly ruling out a federal bailout of any states.

Johnson has expressed opposition to the Federal Reserve System, which he has cited as massively devaluing the strength of the U.S. dollar, and would sign legislation to eliminate it. He has also supported an audit of the central bank, and urged Members of Congress in July 2012 to vote in favor of Ron Paul's Federal Reserve Transparency Act.

In his campaign for the Libertarian Party nomination, he stated he opposed foreign wars and pledged to cut the military budget by 43 percent in his first term as president. He would cut the military's overseas bases, uniformed and civilian personnel, research and development, intelligence, and nuclear weapons programs.

Johnson presents himself as a strong supporter of civil liberties and received the highest score of any candidate from the American Civil Liberties Union for supporting drug decriminalization while opposing censorship and regulation of the Internet, the Patriot Act, enhanced airport screenings, and the indefinite detention of prisoners. He has spoken in favor of the separation of church and state, and has said that he does not "seek the counsel of God" when determining his political agenda. 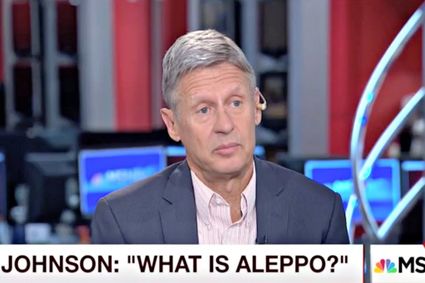 Johnson endorsed same-sex marriage in 2011; he has since called for a constitutional amendment protecting equal marriage rights, and criticized Obama's position on the issue as having "thrown this question back to the states." Johnson supports the enforcement of Protected Classes that was established by the Civil Rights Act of 1964, and believes that providers should be prohibited from not providing service to customers based on demographics, such as race or sexuality.

This differentiated him from his Libertarian Party opponents in the party primary, especially Austin Petersen. He has been a longtime advocate of legalizing marijuana and has said that if he were president, he would remove it from Schedule I of the Controlled Substances Act as well as issue an executive order pardoning non-violent marijuana offenders.

Johnson opposes Roe v. Wade, believing states should decide the matter (accessibility to abortions); however, he has stated he personally believes that "it's the woman's choice."

Johnson has stated his opposition to gun control and has said, "I'm a firm believer in the Second Amendment and so I would not have signed legislation banning assault weapons or automatic weapons." https://en.wikipedia.org/wiki/Gary_Johnson#Political_positions