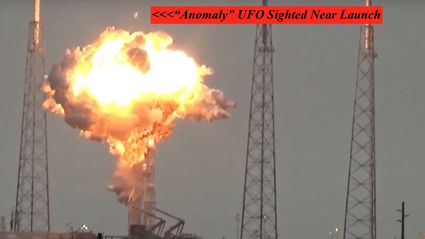 Explosion of a Falcon 9 Rocket on the Launch pad in September. Almost immediately, conspiracy theorists noticed a UFO flying nearby the Falcon 9.

An article in today's Washington Post website corroborates what conspiracy theorists have said since a SpaceX rocket exploded on September 1, 2016: It was deliberately sabotaged.

The investigation centers on one particular competitor, United Launch Associates. ULA is a joint venture between Lockheed Martin and Boeing, and there is no love lost between ULA and SpaceX. ULA occupies a building at the Kennedy Space Center launch facility in Cape Canaveral, Florida. The theory is that a rogue ULA employee launched a drone from that building about a mile from the launch site, while the rocket was being fueled. The drone fired a laser weapon into the fuel stream and the explosion followed quickly.

Space aliens could also have done it, admittedly. But this assumes facts not in evidence.

ULA and SpaceX are competing for many hundreds of millions of dollars of contracts with the Federal government, so the motive for sabotage is clear. Elon Musk, SpaceX's founder and chief executive says they have eliminated all the obvious possibities for the explosion, and are now looking at the less obvious possibilities. Presumably, these include UFO intervention, and sabotage.

On September 1, 2016, during a routine preflight readiness test at Cape Canaveral's LC-40, an explosion occurred in the second stage during fueling, completely destroying the launch vehicle and causing extensive pad damage. The payload, Spacecom's AMOS-6 communications satellite was destroyed on impact with the ground. The incident was the first on-pad explosion at Cape Canaveral involving an orbital launch vehicle since the Atlas-Able 9C disaster in 1959.

The long-running feud between Elon Musk's space company and its fierce competitor United Launch Alliance took a bizarre twist this month when a SpaceX employee visited its facilities at Cape Canaveral, Fla., and asked for access to the roof of one of ULA's buildings.

About two weeks earlier, one of SpaceX's rockets blew up on a launchpad while it was awaiting an engine test. As part of the investigation, SpaceX officials had come across something suspicious they wanted to check out, according to three industry officials with knowledge of the episode. SpaceX had still images from video that appeared to show an odd shadow, then a white spot on the roof of a nearby building belonging to ULA.

Actual video of the ULA Drone sabotaging the SpaceX Rocket.

The SpaceX representative explained to the ULA officials on site that it was trying to run down all possible leads in what was a cordial, not accusatory, encounter, according to the industry sources, who spoke on the condition of anonymity because of the ongoing investigation.

Many on Youtube saw a drone in film of the explosion. An example is embedded as video hereinbelow. Our tongue in cheek story at the time appears at http://www.smobserved.com/story/2016/09/10/business/ufo-causes-spacex-rocket-facebook-satellite-to-explode-photos-video-of-ufo/1880.html

Musk has called the failure "the most difficult and complex" the company has ever had. About a week after the explosion, he pleaded with the public to turn in video or audio of the blast and said the company has not ruled out sabotage as a factor.

"Particularly trying to understand the quieter bang sound a few seconds before the fireball goes off," he wrote on Twitter. "May come from rocket or something else."