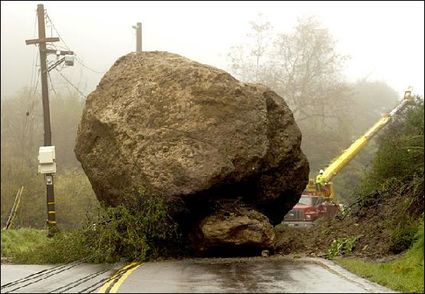 A boulder twice the size of an SUV, rolled down a wet hillside and came to rest in the southbound lane. There was also a mudslide that blocked part of the northbound lane causing Caltrans to shut down Topanga Canyon Road, a main artery connecting Malibu to the 101 Freeway.

Meanwhile 4 sewage spills closes all Long Beach beaches, as a precaution. The closures were also rain related. They will last until further notice, said the county health department.

CBS News is reporting that 4 people are dead and 3 are missing in rain related incidents. 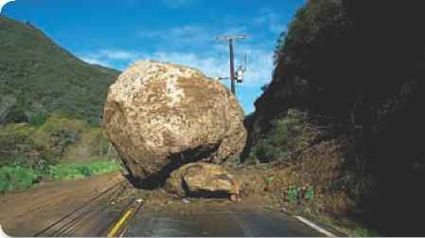 In the article http://www.smobserved.com/story/2017/01/24/news/topanga-canyon-blvd-closed-through-mountains-until-thursday/2528.html you state "A boulder twice the size of an SUV, rolled down a wet hillside and came to rest in the southbound lane." That boulder looks to be about 30 feet in diameter. My first impression was that your estimate of 2x an SUV was off by at LEAST 100 times. So I did the math: volume = 4/3 x pi x r^3 = 14,137 cubic feet Sandstone is about 150 pounds per cubic foot Weight = 2,120,575 pounds SUV weighs 6000 pounds So that boulder weighs over 353 times a full size SUV. Please update your story to more accurately reflect the size/weight of that boulder.