Only the Obamas and their staff attended the intimate affair 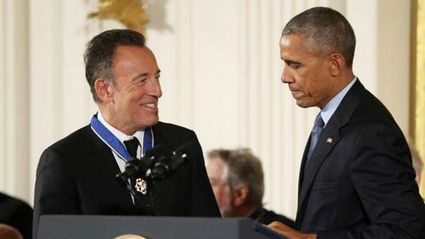 Last Thursday, while the media worried about whether a Springsteen tribute band might play for Trump's inauguration, The Boss, himself, slipped into the White House to give a small concert in honor of the staff who have stood with the Obamas during the last eight years.

A unnamed contributer at fan blog backstreets.com was one of the staff in attendance as Springsteen performed 15 songs for a group of no more than 250 people.

According to the writer, the group filed in for a reception at about 7 pm, where long-time colleagues exchanged stories and hugs with one another. After about an hour, they were all seated in the East Room where the President and Michelle Obama joined them.

Springsteen briefly thanked all for their service, then launched into "Working on the Highway." Later, he spoke about how "Born in the USA" was a misunderstood protest song. His wife Patti Scialfa joined him onstage for two songs, including "Tougher Than the Rest," which he dedicated to the Obamas. He finished the short set with "Land of Hope and Dreams."

President Obama took to the stage and quickly thanked the performer, but was more focused on thanking his staff for all of their sacrifices during his two terms of office. The two couples left the stage together, and everyone else was soon ushered out by the Marine escort.

"I have seen Bruce Springsteen a lot of places," the writer states ".... But this one was a real personal thing, this thing for staff who sacrificed so much over the last eight years. It was a humble, quiet gesture from Bruce to say thanks to President Obama, the staff, and their families. No pomp, no ceremony, no press. Just the man, the guitar, and the songs."

This is the playlist from Bruce Springsteen's performance to honor the Obama staff:

Working on the Highway 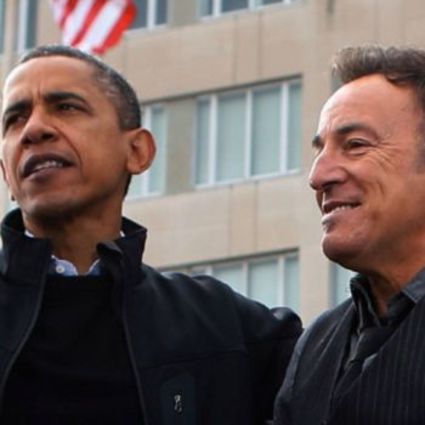 Tougher Than the Rest (with Patti Scialfa)

If I Should Fall Behind (with Patti Scialfa)

The Ghost of Tom Joad

Dancing in the Dark

Land of Hope and Dreams