Coach Richard Kampmann Dies at Age 92; UniHi and Pepperdine Will Miss Him. 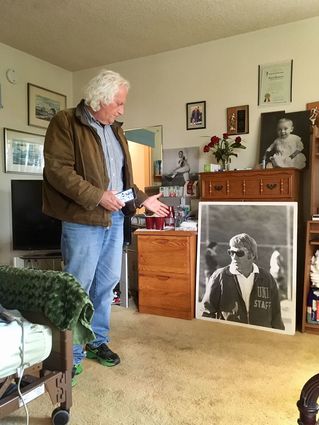 Update: Coach Kampmann's Memorial is set for Feb. 4, 2017 at 11 am at University High School's Stivelman Theater.

2/23, 2 pm PST: With deep sadness, this message is to inform you that Coach Dick Kampmann passed away this afternoon at 2:12 p.m. at his home in Santa Monica. He was with family at the end and at age 92, lived a full and meaningful life. He and Deb are now once more united, forever.

Bill Stimming is now busy making the necessary arrangements and there will be a memorial service for Coach in the near future; we will share the details as soon as available.

Coach's passing is lightened by the knowledge that his contribution to so many lives was recognized and the affection returned by hundreds of his alumni, co-workers and friends for his 90th birthday two years ago and last year's honors at Uni, culminating in the naming of the athletic field where he did so much for so many as Kampmann Stadium. There is no possible way to calculate the contribution he made to thousands of lives, one at a time, one workout at a time, one lesson at a time, in sport and for life.

Please Forward this message to all who should see it. More information on services will be sent as soon as arrangements are made.-- Rich Perelman

Coach Richard Kampmann, University High School's beloved track and cross-country coach who later coached track and cross country distance running at Pepperdine University, has died. He was (and remains) a role model for hundreds of boys and girls over the years.

Kampmann was the coach from 1962 to 1987 at UniHi. Subsequently, he became the Women's Track and Cross Country coach at Pepperdine University in Malibu. In May, UniHi dedicated the athletic field to him-Richard M. Kampmann Stadium.

"Coach K Really can't talk much anymore, the dementia is what's getting him," his son, Bill Stimming, said 2 weeks ago. "A month ago he was coming to our home every Sunday, for dinner with our family. It's sad and astonishing to see the difference in just one month."

"My son Christopher, his grandson, is the love of his life, but he was crying his eyes out knowing the end was near for his beloved grandfather. It broke my heart to see him."

"Across the country there are iconic teachers and legendary coaches, and our Coach Kampmann assured his place among that respected beloved prominent group over decades," wrote Greg Levin, UniHi Class of 1965. "You came to realize on day one , at cross country orientation in the UniHi locker room, when Coach K spoke for 40 minutes about the sport, his philosophy about practice and training, and about improving every week as long as you challenge yourself. He encouraged everyone and he said that you could be any shape any size, tall and skinny, short and stocky and it didn't matter. Just come out to do your best everyday and you'd get better," said Coach."

"He not only taught you about devotion to running, he showed you how to be a respectful competitor, a patient gentleman, and a compassionate person. He was incredibly inspiring, always encouraging and taught patience and excellence. He loved coaching , he loved uni - high and he believed in his students," said Levin.

"Coach Kampmann was the reason that my Dorsey High School buddy Craig Owens and I would get up early enough in the morning , do five miles in the Baldwin Hills before making breakfast, and getting ourselves to school. Dorsey was in the southern league of the Los Angeles city school system. I was blessed to have had him as my coach the year before I graduated in 1959," wrote Love.

"Coach K then went on to Uni - High in the western league for the majority of his career , where he influenced so many as he did me. The Beach Boys wrote a song in 1963 called " Be True To Your School," which in no small way was influenced by our coach.

Coach Kampmann's influence cannot be quantified . He touched so many lives of so many of us as young guys of varying degrees of talent. Even if you weren't the greatest runner, he made you feel like you were an Olympian." 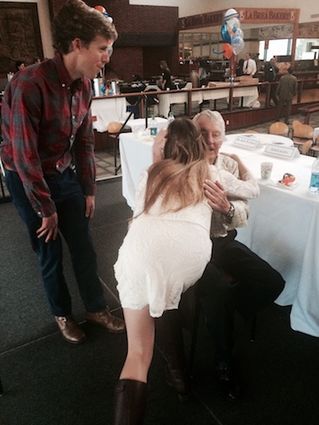 Coach K receiving a hug from a Pepperdine runner, at his 90th birthday party in 2015

"He will be honored in heaven for sure. My heart is not sad as much as it is filled , with the warmth of the love and gratitude that I, like so many others , have for that man.

Over the three years I ran for Coach Kampmann - as someone put it at the memorial, we ran for him even as we ran for ourselves - he was always fair and always honest. He was a father figure in an almost biblical sense. If he didn't raise the dead, he raised the spirits of generations of young people. And he seemed to have the ability to cure the sick, at least once. I saw him do this the only time I questioned his judgment, after telling him at track practice that I had a bad cold and thought maybe I shouldn't be running over hurdles. He told me to run over hurdles. I did. The next day, as if by magic, my cold was gone. Since then I've tried to kill off my colds many times with exercise. It's always been an exercise in futility.

The most altruistic and inspiring mentor I have. Coach K lives on in the hearts and legs of those of us lucky enough to have been his athletes. Godspeed Anchorman!