Venice Neighborhood Wishes Snapchat Would Vanish, Like An Embarrassing Photo or Melanoma

Protest Rally to Tell Snapchat that Not Everybody Loves You, Baby 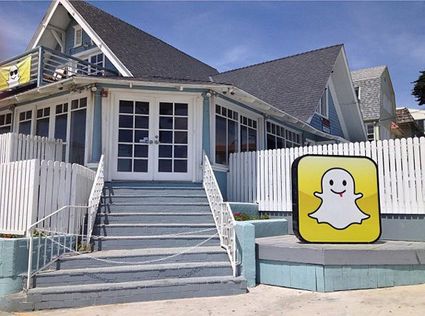 Snapchat's first Venice HQ used to be small shops. When Snap Inc. outgrew it, they just spread like melanoma to other buildings in Venice.

When Snap goes public on Thursday at an opening price of at least $23.50 a share, CEO Evan Spiegel and chief technology officer Bobby Murphy stand to make at least $376 million each. But the neighborhood would rather have a few more Gangsta's than internet billionaires from Stanford.

It all began with a search for a reason to have technologically well-educated kids, accept jobs in Los Angeles. Techies want to be in Silicon Valley, San Francisco or Seattle, with all the other Techies. That's a problem to Google, and to an LA Based tech company called Snap, purveyors of Snapchat. Let's see, Snap thought ..... I know!

We'll put them all on Venice Beach. They can skateboard on the Venice Boardwalk during the lunch break, go to the beach in the afternoon and surf! We'll get them nice apartments near the ocean, pay them $250K a year, and fire them when they turn 30, so we can hire someone younger.

Snapchat is an app that lets you send videos and photos to other kids safe in the knowledge that said photos and videos would disappear after viewing. Hence the ghost logo. If you're too old to have used it, ask your kids; they probably have it on their phones. Many residents of Venice wish that Snap would similarly just go away, like an embarrassing photo from last Friday's rave.

The influx of 1000's of techies has upset the balance that has existed since 1970 in Venice, which was known not for 20 somethings earning six figures, but for aging hippies, surfers and bikers who beat on bongo drums down by the beach.

Venice used to be about affordable housing by the sea, little shops selling T Shirts and chachkas, cheap restaurants, crowds by the boardwalk. That beachy lifestyle seems threatened by SNAP and it's ilk. The amount of beach real estate is fixed, and tech companies like Snap and Google have greatly increased the demand for it, bidding up the price.

Which brings us to Thursday's protest, planned by a neighborhood that feels threatened by the new internet millionaires and billionaires:

Venice residents to protest Snapchat on Tuesday, Feb. 28th, on the eve of their IPO.

Sunday, Feb. 26th 2017, Venice CA. – A broad and diverse group of Venice residents, business owners, artists and landlords will be taking to the streets on Tuesday, February 28th, from 3:00pm to 6:00pm, in front of the "Snapchat Campus" on the 100 block of Market Street in Venice, California 90291, between Pacific and Speedway, to protest Snap's economic and cultural assault on Venice Beach. 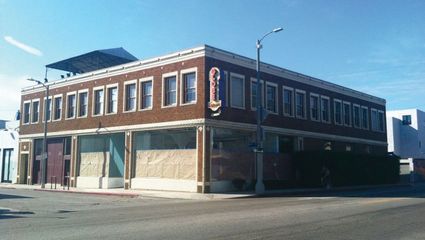 This building used to be a clothing store, The Aardvark's Odd Ark. Low income tenants lived upstairs in little apartments just a block from the beach. Now it's offices for Snapchat, who pays the landlord triple the rent.

Local residents and community groups are enraged at Snapchat's insensitive intrusion into the Venice community. Cited are: the co- opting of Venice landmarks and rendering them private and off- limits to the general public; Snapchat security guards hassling and harassing people walking on public sidewalks in front of Snapchat offices; turning beachfront residential properties into office space in flagrant violation of zoning regulations; acquiring long term leases on multi-unit residential properties and apartment buildings, and evicting long time Venice residents to provide living quarters for Snapchat staff; Snapchat enjoying huge tax breaks from the City of Los Angeles while destroying one of LA's major tourist attractions, pricing out venerated Venice institutions that have made Venice one of the largest tourist destinations in the US.

Both Bloomberg and Buzzfeed have published articles this week outlining the Venice community's reactions to Snapchat's assault on Venice.

Venice would do better by voting Mike Bonin out of office!

Welcome to the world of gentrification. It happened during Industrial Revolution in Detroit. Now Santa Monica thinks they're special because an industry is burgeoning right under their feet? Take a lesson from San Francisco. Once full of hippies, gays, and rock music, it's now a Tech Paradise. Has it really destroyed the thread of the city? No. San Francisco hat now has more visitors, better news, and growing infrastructure because of the influx. The movie industry has already done enough damage to the region and it's job outlook. At least give the tech sector, which hire folk who bring high education, believe in green policies, and are actually aware about the city they vote in a chance.