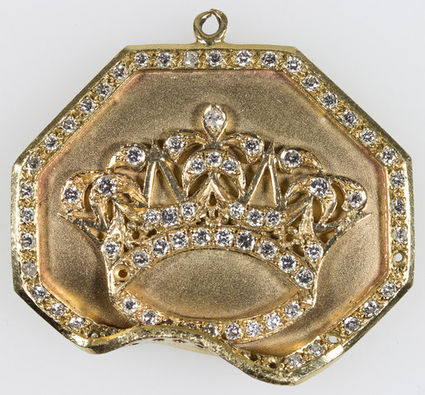 Rap artist Tupac Shakur's gold and diamond medallion obtained from a close family relation. It is believed that the indentation at bottom was caused by a bullet strike from the mortal wounding of Shakur in Las Vegas on Sep. 13, 1996.

On April 7th rap legend Tupac Shakur will be inducted into the Rock and Roll Hall of Fame in Brooklyn, New York. On the same day and only a few blocks away, a large selection of Tupac's lyrics, song lists, clothing, and jewelry will be offered in the first "Black History Auction" held specifically to honor the achievements and contributions of African-Americans.

Over 300 items will be sold live by auctioneers Alexander Historical Auctions at The Dumbo Loft, 155 Water St., Brooklyn, New York starting at 2:00 PM.

Offered for sale will be more than three dozen items from the legendary artist, including: 14 sets of lyrics, including "Catchin' Feelins," "Wonda Why They Call U Bitch" and "I Ain't Mad At Cha"; his track list and a master recording for "All Eyez On Me"; his first music contract; contracts made to secure bail money; and his prison identification. Personal items include Tupac's signed Koran, Rolls Royce license plates, his trademark nose and ear studs, screen-worn clothing, and jewelry, including a bullet-struck medallion from his fatal 1996 shooting. 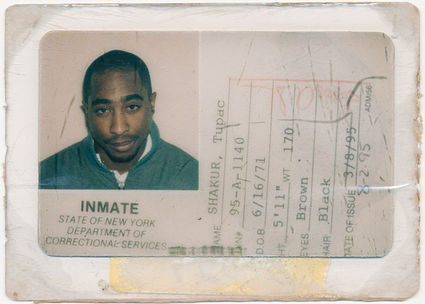 The prison identification card carried by rap artist Tupac Shakur during his incarceration at the Clinton Correctional Facility in New York 1994-95. Producer Suge Knight posted his bail in exchange for a three-record contract. The identification, as well as the record contracts, will be sold at "The Black Heritage Auction."

Also being offered is a signed photo of Dr. Martin Luther King with a quote from the Constitution: "...all men are created equal..." along with a letter by King mentioning "Jackson," Thurgood Marshall, and the Freedom Riders, and an important signed copy of his "Stride Toward Freedom." Malcolm X is represented in a letter from prison discussing the "blackness" of a man, and several other important items. From President Barack Obama is a 2012 NCAA "Final Four" leader board, which appeared on ESPN, signed at the center. Boxer Muhammad Ali is represented in several lots, including a signed print of his painting showing a victory in the ring, adding his famous "Float like a butterfly" quote and a print of a painting later "censored" by the U.N.

Other notable items to be offered include:

- The first literary work of a black American, a first edition of Phillis Wheatley's "Poems," 1773

- Booker T. Washington's notes on the education of blacks

Bidding will be available live, by telephone, and at the bidding websites invaluable.com, the-saleroom.com and liveauctioneers.com. The entire sale may be viewed online at http://www.alexautographs.com/pdfs/AlexanderHistoricalAuctions67.pdf. Alexander Historical Auctions may be reached at 203-276-1570, email: [email protected]