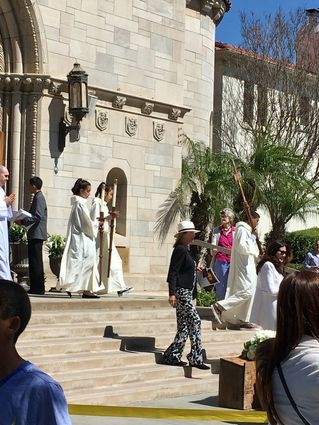 The main church holds 926 people, 100 or so more standing in the back. The building will be the site of 8 masses today, at 75 minute intervals. There are also masses to be held in the Pavilion, and in the Gym.

So one can arrive pretty much anytime and join in prayer.

The holiday celebrates, of course, the resurrection of Jesus Christ, the central miracle of Christianity. What is special about this year's celebration? I asked Victoria, one of the people ushering congregants outside St. Monica's. She thought for a moment. 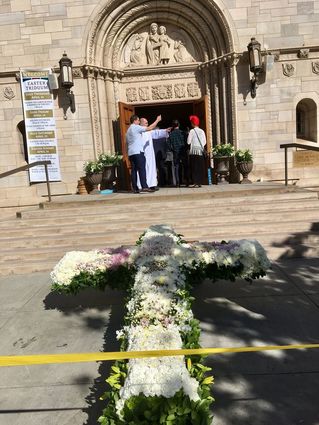 A deacon directs late arrivals to The Pavilion, where an alternate Easter service was conducted. St. Monica's church holds only around 1000 worshippers.

"There's a lot of problems in the world but today is Easter," she said, noting that while Monsignor Torgerson had been the head padre at St. Monica's for years, they had a new assistant priest and today was his first local Easter celebration.

St. Monica's is the largest capacity church in Santa Monica, and shares its name with the City's patron saint. In Catholic hagiography, Saint Monica was the mother of Mary and therefore the grandmother of Jesus.

Saint Monica's has many celebrity congregants, including for example, former governor Arnold Schwarzeneggar and Maria Shriver.