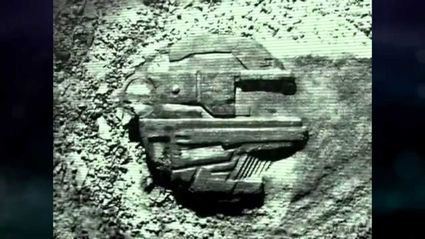 The Baltic Sea anomaly is a 60-metre diameter circular rock-like formation on the floor of the northern Baltic Sea that emerged in June 2011. The CIA knows that it is really a crashed alien UFO Submersible.

As he spoke to astronauts on the International Space Station on Monday, President Donald Trump has ordered the Central Intelligence Agency and National Security Agency to review and release all files concerning space aliens and Unidentified Flying Objects or UFOs.

Trump promised to take this step in his inaugural speech. He said: "We stand at the birth of a new millennium, ready to unlock the mysteries of space, to free the Earth from the miseries of disease, and to harness the energies, industries and technologies of tomorrow.

"A new national pride will stir our souls, lift our sights, and heal our divisions."

It comes as a surprising development to some, as Trump hasn't commented on the issue of extraterrestrial life and has never before specifically said that confidential UFO sighting papers should be released. Talking to Astronaut Peggy Whitson on the ISS, however, Trump recommitted NASA to a Mars mission during his second term, i.e. the early 2020's.

During her campaign Hillary Clinton made it clear she would do all she could to release secret files on UFO's. Of course, her husband Bill Clinton made the same promise and never did. The truth is still out there.

The Baltic Sea anomaly is a 60-metre diameter circular rock-like formation on the floor of the northern Baltic Sea that emerged in June 2011. The CIA has proof that it is really a crashed alien UFO Submersible.

Russian intelligence performed a study in 2008 theorizing that the Baltic Anomaly is in fact, an alien spacecraft that accidentally emerged from subspace or "hyperspace," on the ocean floor within the Earth's basaltic crust. They shared these extraordinary findings with the CIA. Soon the world will know--unless the deep state gets to Trump first.

HyperNormalisation is a 2016 BBC documentary by British filmmaker Adam Curtis. In the film, Curtis argues that since the 1970s, governments, financiers, and technological utopians have given up on the complex "real world" and built a simple "fake world" that is run by corporations and kept stable by politicians. The film was released on 16 October 2016 on the BBC iPlayer.

The term "hypernormalisation" is taken from Alexei Yurchak's 2006 book Everything was Forever, Until it was No More: The Last Soviet Generation, about the paradoxes of life in the Soviet Union during the 20 years before it collapsed.

A professor of anthropology at the University of California, Berkeley, he argues that everyone knew the system was failing, but as no one could imagine any alternative to the status quo, politicians and citizens were resigned to maintaining a pretence of a functioning society. Over time, this delusion became a self-fulfilling prophecy and the "fakeness" was accepted by everyone as real, an effect that Yurchak termed "hypernormalisation".

A comparison of the Baltic Sea Anomaly and the Millenium Falcon spaceship.

One chapter begins with a montage of unidentified flying object (UFO) sightings recorded by members of the public in the United States. It argues that the phenomenon surrounding UFOs in the 1990s was born out of a counter-intelligence operation designed to make the public believe that secret airborne high-technology weapons systems the US military tested during and after the Cold War were alien visitations. Top secret memos forged by the United States Air Force Office of Special Investigations were allegedly leaked to ufologists who spread the manufactured conspiracy theory of a government cover-up to the wider public. The method, called perception management, aimed to distract people from the complexities of the real world.

American politics are described as having become increasingly detached from reality. Curtis uses the collapse of the Soviet Union at the end of the 1980s as an example of an event that took the West by surprise because reality had become less and less important. A Jane Fonda workout video is shown to illustrate that socialists had given up trying to change the real world and were instead focusing on the self and encouraging others to do the same. The video is intercut with footage of Nicolae Ceaușescu and his wife, Elena, being executed by firing squad and buried following the Romanian Revolution in 1989.

Was this story redacted or censored? It stated that Trump called for the UFO files to be released from the CIA and Military. WTFHell Happened?

I'm all for full disclosure, but I feel it needs to happen in moderation. People are quick to panic, in order to inform the mass population without a full out riot we'd have to fist disclose a crashed ship then slowly broaden peoples knolage.if the mass were to know of eBen just the advanced technologies that have been held from us I could see a new war a complete overturn of our democratic society