Various health problems, including nosebleeds, migraines, respiratory and other such symptoms occurred in residents who live near Porter Ranch 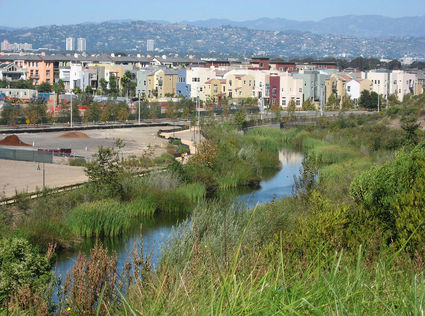 Playa Vista from the South, with Bluff Creek in the foreground

Activists believe Playa del Rey gas storage facility could be the next to have a massive methane leak, following Aliso Canyon. Environmental group, Food and Water Watch, in a promotional flyer, warns to "stop the next methane blow out."

Owned and operated by SoCalGas Company, The Playa gas storage field has 54 active gas wells. It's older than Aliso Canyon, and was built in 1942 by reconstructing old oil wells that were mostly empty.

At a meeting in Marina del Rey last April, Alexandra Nagy, lead organizer of Food and Water Watch told a group of locals that they can "work at grassroots level" to shut down the Playa del Rey gas storage facility"

Alexandra also said that "people power on the ground can take control," as she encouraged people to "go door to door, work with neighbors and HOA, power building at a local level to shift the balance of power." This is what Alexandra explained as "community empowerment."

Alexandra also commented that "energy justice" is one of the focus   issues of Food and Water Watch.

Ms. Nagy brought to the forefront, the Oct 2015 Aliso canyon blow out as a means to understand the potential risk of Playa del Rey methane blow out.

Ms. Nagy also, in a cheer to the group at the meeting, said, "We want to shut it all down!"

Ms. Nagy gave a presentation to show how the residents and activists in Porter Ranch were able to use as she said, "people power on the ground to take control," to shut down Aliso Canyon. The gas storage field in Aliso Canyon has been "temporarily" shut down since the blow out.

Ms. Nagy's slides revealed photographs of children with profuse nosebleeds and a sick child with a bald head and arm bandage.

Based on a document made by Los Angles County Department of Public Health, various health problems, including nosebleeds, migraines, respiratory and other such symptoms occurred in residents who live near Porter Ranch, the community within the vicinity of Aliso canyon gas storage field.

In an L.A. Daily News report, posted this past February, a Porter Ranch physician, Dr. Nordella, said that there had been a pattern of health symptoms that have emerged among nearly 50 patients that he's followed since the Aliso Canyon massive methane leak.

Food and Water Watch organizers suggest to residents that if they "smell something, say something," or call 1-800-cut-smog or go online to aqmd.gov/contact/complaints/smoke-dust-odor, which is part of Air quality management depart, a state regulatory agency.

A Marina del Rey couple, Carl and his wife who live in the Oxford Triangle said, "we do smell it (gas) and wondered what was that smell."

Mike Patel, owner of a home in the bluffs above the Playa gas storage field, said that he smells gas about once a week, although he has not reported it yet. He also hears sound of the machinery going frequently. If you look up and out towards the open sky from Mike's home, you can catch a glimpse of the ocean, but if you look down you see the gas storage field.

Food and Water Watch claim that there are health impacts surrounding the Playa del Rey gas storage field.  According to literature published by the organization, "cumulative exposures to chemicals could pose serious risks to the health of those living nearby."

A Los Angeles County Department of Public Health assessment of health effects of the Aliso Canyon gas leak concluded that  "small amounts of chemicals are present in natural gas. Among these chemicals, the one of greatest concern is benzene, chemical known to cause cancer."

The pathway to shutting the playa del Rey gas facility was outlined in Nagy's slide presentation. The slide said the following:

Change the LA zoning ordinance to prohibit oil and gas activities within 2500 feet of sensitive receptors, such as homes, schools, hospitals and churches.

In 2016, a couple of months after Aliso Canyon had the blow out, CBSLA reported that Manhattan Beach City Counselor, Wayne Powell voiced concern that the Playa del Rey gas storage field could also have a methane blow out.

"It could definitely happen, because this facility is much older, and they don't have the shut off valves, the sub surface shutoff valves, that would prevent such an incident," Powell said.

A notable gas leak did occur in Playa del Rey in 2007 and prompted a public complaint prepared by Environmental Law Foundation in the public interest as plaintiff vs. SoCalGas as defendants.

The complaint was for civil penalties in violation of California Health and Safety code SS 25249.5. ELF claimed that SCG was in violation of prop 65 because it allegedly injected too much gas underground, contaminating the drinking water. In 2012, a settlement was made in which SCG agreed to increased gas leak monitoring.

According to the Environmental Law Fund complaint document, https://www.envirolaw.org/documents/SoCalGasComplaintFINAL.pdf

"These 70 year old wells have deteriorated over time and have developed cracks and leaks...threatening to pass into the Ballona Aquifers, and contaminating... these protected sources of drinking water."

According to Southern California Air Quality Management Department (SCAQMD), CPUC approved the settlement agreement of complaint against SoCal Gas in 2007 for allegations of leaking gas. SoCal Gas was then required to monitor for soil gas and subsidence (sinking), limit pressure in some areas to no more than 2400 psi.

Playa del Rey gas storage field which dates back over 70 years, also has a reported gas explosion of a vent stack that caused a flare that could be seen for miles in 2013 and 2 complaints of the facility as source of odor in 2015 and 2016, according to SCAQMD and DOGGR.

When interviewed, this month, Andrea Leon Grossman, Food and Water Watch organizer, said, "So CalGas has terrible safety," and she claims there is no "fence-line" monitoring.

When asked about evidence to support the claims Ms. Grossman had made about the gas company's unsafe track record she just explained about a leak that occurred this past month that the gas company claimed was not their fault, blaming it on a third party pipeline company, but then ending up plugging up the leak.

In a study published in May, 2016, by the environmental organization, The Center for Biological Diversity, state oil and gas regulator, DOGGR, or Department of Oil, Gas, and Geothermal Research, has, "decades-long pattern of failing to enforce basic rules and oversee safety tests at the leak-prone Playa del Rey gas storage facility."

SCG spokesperson Christine L Detz, wrote in an email, "the Playa del Rey storage facility is under strict safety and testing requirements." and that SCG "considers the safety of every family and customer we serve to be our highest priority."

Detz also wrote, "SoCalGas has taken steps to ensure the Playa del Rey storage facility meets and exceeds the rigorous standards set by state regulators. All wells at Playa del Rey are undergoing the same comprehensive battery of tests conducted at Aliso Canyon. The state's energy experts have called these tests the most comprehensive tests in the country."

Ms. Detz, in her email statement claimed, "SoCal Gas has installed a remote pressure monitoring system for all wells at the Playa del Rey storage facility," and that 'daily patrols are also conducted to inspect for leaks.

Mr. van der Valk stated, "CA Food & Water Watch is an Oakland-based activist group that wants to end the use of all natural gas no matter the impact or cost." Van der Valk continued his statement, " During the leak, the organization exploited the situation by parachuting 'organizers' into our communities to exacerbate fears, spread misinformation, and recruit residents to advocate for their short-sighted agenda."

Van der Valk, in his letter expressed concern about Food and Water Watch holding a meeting in Westchester, as he wrote, to share "facts" about the '"dangers" of living there. He continued, "I was concerned and felt a need to warn you (Cyndi Hench). Food & Water Watch pits neighbor against neighbor-intimidating those who disagree with them and their strategies...many neighbors in my community are now less willing to engage in the productive dialogue to hold companies like SoCalGas accountable."

Another letter was emailed to the community leader of Playa del Rey, June 9th, one day before the town hall meeting was scheduled to inform the residents about a potential large methane leak at the Playa gas storage facility. This letter was sent by Susan Sifuentes Trigueros, Regional Public Affairs Manager of LA SoCalGas company. 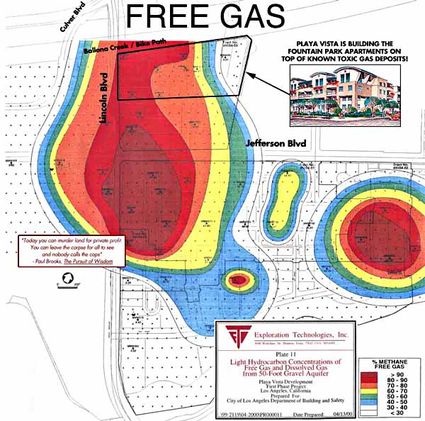 The letter contained language quite similar to that Van de Valk's.  "CA Food & Water Watch-the Oakland based arm of a national special interest group-is hosting what they are calling a 'town hall' in Westchester to discuss the natural gas storage facility in Playa del Rey. The group is bringing outside speakers from Porter Ranch to inform Playa del Rey residents of the 'dangers' of living there."

There is speculation, according to Alexandra Nagy, of Food and Water Watch, that since Mr. van de Valk used similar language in his "warning" letter to the Neighborhood City Council president, Cyndi Hench, that de Valk might have his own special relationship with SoCalGas. At this point, this is only speculative and nothing has been confirmed.

Not only Food and Water Watch, but also other groups, including Physicians for Social responsibility, Indivisible, Grassroots Coalition, and concerned residents attended the Town Hall meeting last Saturday in Westchester to voice their concerns of a potential massive methane leak at the Playa facility.