Not everyone thinks unlicensed selling on the beach by undocumented immigrants, is so innocent. 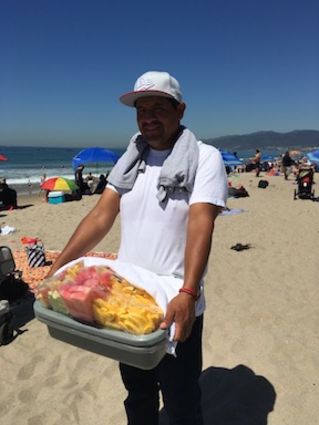 Have you ever heard the jangling bells of the paleteros on Santa Monica beach, pushing their carts full of ice cream through the sand, hats and sweatpants on to protect themselves from the heat? Have you ever heard a fruit vendor's call of "Mango, Mango, Watermelon Mango!" and looked up to see someone trudging through the beachgoers with a bucket of fruit balanced on their head, ready to make your day a little nicer? "

Today at around 11:30 a.m. near Santa Monica beach lifeguard tower No 27, we saw a less-than-human application of the law. If you didn't know, yes, apparently it is illegal for these men and women to sell fruit, ice cream, boogie boards, and umbrellas at the beach. If that comes as a surprise to you, you're not alone - I live in this community and see them every time I'm down by the water.

So it is by the grace of the Santa Monica police that this ordinance is not enforced most of the time. Today, we saw a man be confronted by two city of Santa Monica officials, accompanied by sanitation workers. We watched as he was forced to dump all of his WRAPPED ice cream into garbage bags as the officials explained, "People have been complaining. People are getting sick from the things [the vendors] are selling." We watched the truck roll off with this man's week's wages - food from his family's mouths - in the back of its flatbed.

We tried to argue with the city officials and the police who would come by after: He wasn't hurting anyone, the ice cream was wrapped, and if they were going to take away his livelihood, the humane way to do so would be to ask him to please leave the beach, rather than having him throw away what was hundreds of dollars worth of perfectly good merchandise.

When a police officer asked my wife, who had been advocating for the paletero man, "Is this your ice cream?" and she said "No," his answer was: "Then it's not your problem."

What's happening here - in a so-called sanctuary city - men and women being disproportionately targeted by enforcement of restrictive laws - this is everyone's problem. Please donate what you can - $1, $5, whatever you've got - so that we can help pay this good man's ticket.

Salcido raised all $795 in just 3 days, to pay the man's ticket. But not everyone agrees with Salcido. One Facebook user wrote:

This article is incomprehensible!!! they are defending this guy for selling on the beach without a license??? ITS THE LAW!!!

I'm sure NO ONE, in this group has ever purchased a diarrhea mango from any of these venders! can you imagine if we just let anyone run free and sell in the city with no control?

"That high a fine creates more problems than it solves," another user responded. "Social and otherwise. Not a smart way to deal, I think. People want to work (and are) willing to do this job!"