No Way Out: A Modest Proposal to Lower Greenlandic Suicide Rate 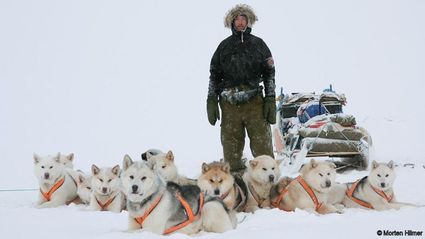 Denmark patrols and protects its sovereignty over Greenland with a small naval unit called the Sirius Patrol.

By American standards, it is a big problem in a small country. Greenland has the world's highest suicide rate, 50 per year in a population of around 56,000. This yields a suicide rate of nearly 1 per 1000, or 24 times the suicide rate in the US.

Greenland sources tell us the country experienced 28 suicides in the first 9 months of 2017.

Why do so many young Greenlanders kill themselves? No one knows for sure. Theories include geographical isolation and the cold.

We state the problem at the end of this article, in the form of a long quote from Wikipedia. But the purpose of this article is to propose a solution.

Most of the people killing themselves are young Inuit men, living in smaller, isolated communities. Rates are lower among the Danish minority in Greenland, and also lower for women.

Clearly, these young men see no easy way out of the boredom and isolation of a rural existence in the far north. They often choose violent means of death, with 46% hanging themselves and 37% shooting themselves.

Denmark already provides free college education to any young Greenlander who wants it. And to be sure, "Greenland is an exciting destination with unique nature, climate, culture and spirituality." http://education.uarctic.org/universities/greenland/. But it is not for everyone.

"It is said that the boys are spoiled just as they were in the old days when harsh natural conditions rather than parental guidance set the rules in a culture where boys were destined to be hunters." Bjarne Pedersen, acting Danish Commissioner to Greenland, once told the New York Times. "Now, many young men are expected to go on to higher education. Some do not succeed and do not know what to do with their life." http://www.nytimes.com/1995/09/17/world/in-greenland-prosperity-hasn-t-extended-life.html

Why not organize a Greenlandic unit of the Danish military, just for Greenlandic young people, mostly for young men, though young women could serve as well.

There is already a special Greenlandic unit called the "Sirius Patrol" which provides the only government services (i.e. search and rescue) in NorthEast Greenland National Park, the world's largest national park. http://www.bbc.com/news/magazine-15940985 - Denmark patrols and protects its sovereignty over Greenland with a small naval unit called the Sirius Patrol.

But the Sirius patrol consists of only 5 or 6 men, most of them Danish in origin. The Greenland unit's mission I propose, would not be search and rescue in remote Arctic places.

I envision a battalion sized unit of 100 or 200 men only; not large by world military standards. The unit would have separate identity and insignia within Denmark's military. The unit could specialize in peacekeeping through the UN, or upon request of local governments. This is a valued and prestigious service in a world with too much conflict.

Denmark already spends $5 billion per annum on Greenland's government, about $9,000 per Greenland resident. This is enough to, say, lease apartments for them in Toronto, Vancouver BC, or even Miami, Florida.

It is a radical solution and not one directed toward preserving Inuit culture, the current theme song of Greenland's administration. Around the world, young men need something worthwhile to do. My modest proposal is intended to give them a dignified way out of boredom and isolation, that will also teach them skills they can use in other employment at home or abroad later in life in law enforcement or security.

Given how out of hand the problem is becoming, it is worth considering.

I don't mean to be overly critical. My own country has a severe gun violence, too, as witnessed by the 58 people a mentally ill man recently shot dead in Las Vegas. The problem of mass shootings in the United States will require thinking outside the box, and is beyond the scope of this article. The problem of Greenlandic suicide will also require that we set aside political correctness and imagine a future for despondent young men different than the dictates of their national and personal histories.

"Suicide in Greenland is a significant national social issue. According to government reports, between 20% and 25% of Greenlanders attempt to kill themselves at some point in their lifetime. Greenland also has by far the highest suicide rate in the world: reports between 1985 and 2012 showed that an average of 83 people in 100,000 committed suicide, more than twice the rate of the second placed country, Lithuania.

Greenland is a geographically and culturally isolated nation, as well as one of the coldest and least populous countries in the world. Although facts like these may contribute to suicide-related issues, it is not clear if they have direct influences on Greenlandic suicides.

Furthermore, different initiatives have been taken to reduce the suicide rate in the country, such as roadside posters, and a national suicide prevention strategy involving courses, education, local communities and professionals (such as teachers, social workers and doctors) has been initiated.

According to a report published in the Science Daily in 2009, the suicide rate in Greenland increases during the summer. Researchers have blamed insomniacaused by incessant daylight.

Culture clash between the traditional Inuit culture and modern Western culture is also assumed to be a contributing factor. " https://en.wikipedia.org/wiki/Suicide_in_Greenland