IRS Targeting Settlement as Scary as the Scandal

Groups hounded by the IRS sued in 2013. Now a settlement has been reached. 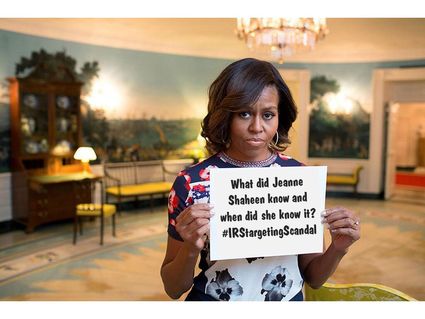 What did IRS Commissioner Jeanne Shaheen know and when did she know it?

Just the name of the case tells you we have a problem: Linchpins of Liberty, et al, v. United States of America.

For anyone who thought the United States was on the side of liberty, not fighting against it in court, the IRS targeting of groups with "liberty" in their name was a disquieting thing.

And it wasn't just liberty in the crosshairs. "Patriots," "Tea Party" and "political-sounding" names also were singled out for extra scrutiny, which included demands for the names and Social Security numbers of donors and volunteers.

The triggering event for this exercise in intimidation wasn't some report of violence or threatening behavior. It was a routine application by the groups for non-profit, tax-exempt status.

Over three dozen groups that were hounded by the IRS in this manner filed this lawsuit in 2013, and now a settlement has been reached.

It's just as depressing as the name of the case.

Under the agreement, the government admits, "On May 10, 2013, then-Director of the IRS's Exempt Organizations Division, Lois Lerner, publicly admitted that the IRS used a method of centralization for certain organizations based on their names, such as 'Tea Party' or 'Patriots.'"

The government also admits that Lois Lerner said, "That was wrong, that was absolutely incorrect, it was insensitive, and it was inappropriate."

Nice to have that cleared up, since she wasn't fired or prosecuted for anything she did.

Lerner, the settlement notes, also "acknowledged that the IRS requested information from those applicants that was too broad, unnecessary, and inappropriate, including requests for the names of contributors to those organizations, which, even if relevant in some circumstances, were not here."

And what about the groups that were subjected to this wrongful, inappropriate, unnecessary, incorrect, insensitive treatment? What do they get?

They get an acknowledgment that the IRS understands "it is unlawful to share, disseminate, or otherwise use for any purpose" information obtained from processing tax-exempt applications in response to "requests" seeking "names of donors," and "whether any such persons intend(ed) to run for a public office, and, if so, the identity of such office."

Is that a confession of political spying?

Was the IRS disclosing information about participants in conservative groups in response to requests from Obama administration officials?

If so, they know now it was wrong. Case closed.

The IRS also understands, now, that it was wrong to keep a BOLO spreadsheet - Be on the Lookout - of conservative-sounding groups, and that it's generally wrong to apply the tax laws of the nation to groups based only on their name or apparent political views.

The Treasury Inspector General for Tax Administration did an audit of the IRS investigations into the conservative groups and made a lot of recommendations to prevent this from happening again. The IRS says it accepts those recommendations.

All remaining claims are dismissed, and all parties bear their own legal costs.

The case ends with this: The court declares "that it is wrong" to apply the U.S. tax laws and regulations to any entity based solely on its name, political views or lawful associations, and states that the law must be applied evenhandedly.

That's the settlement. Some of us thought that was the law.