Was it a UFO, an ICBM from North Korea, or Hawthorne based SpaceX Latest Rocket?

Falcon 9 photographed by folks from San Diego to Phoenix 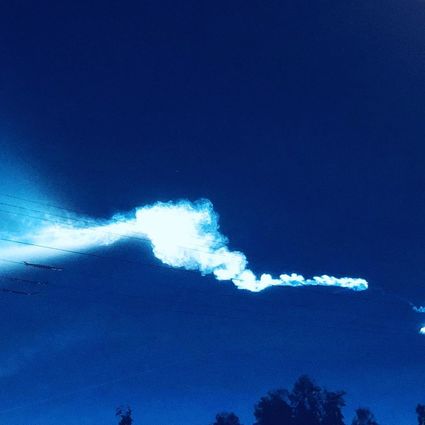 The Los Angeles Fire Department put out an advisory saying the "mysterious lights in the sky" was from the Vandenberg launch.

A SpaceX rocket taking off from Vandenburg AFB Friday evening caused millions of residents of the Southwest alll the way to Arizona, to wonder if they were seeing a UFO. Or a North Korean Rocket. I thought it was a meteor, personally. But no, it was a Falcon 9 rocket streaking across the night sky while excited onlookers snapped photos and recorded video.

At first the mysterious white light appeared during the evening rush hour, sparking questions and speculation from the many onlookers who observed the object but could not immediately identify it.

Police began receiving numerous phone calls shortly after 5:30 p.m., when a brilliant but slow-moving light -- somewhat resembling a jellyfish-like creature -- made it was across the sky. Around the same time, the newsroom received numerous photos and videos showing the bright, glowing object; a number of Twitter users followed suit, posting images as they sought answers.

"SpaceX's Falcon 9 rocket, launched from Vandenberg Air Force Base at 5:27 p.m., was carrying 10 satellites to low-Earth orbit. The satellites will be part of a constellation operated by Iridium Communications. All 10 satellites successfully deployed, with the last one deploying about 1 hour and 12 minutes after liftoff. The rocket's first stage was previously used during a mission in June.

Officials had warned the launch could be seen across Southern California and beyond. But on the day before the holiday weekend, the streaks of light against the blue sky were something to behold," said the LATimes website.

Falcon 9 is a series of two-stage-to-orbit medium lift launch vehicles, named for its use of nine first-stage engines, designed and manufactured by SpaceX. Variants include the retired Falcon 9 v1.0 and Falcon 9 v1.1, as well as the current Falcon 9 Full Thrust, the world's first partially-reusable launch system. Both are powered by rocket engines utilizing liquid oxygen (LOX) and rocket-grade kerosene (RP-1) propellants.

The current "Full Thrust" version can lift payloads of up to 22,800 kilograms (50,300 lbs) to low Earth orbit, and up to 8,300 kg (18,300 lbs) to geostationary transfer orbit (GTO), when configured in expendable mode. The first stage can be recovered and reused for GTO payloads up to 5,500 kg (12,100 lbs), automatically landing after disconnection of the second stage.

Altogether, the initial version 1.0 flew five times from June 2010 to March 2013 and version 1.1 flew fifteen times from September 2013 to January 2016. The "Full Thrust" version has been in service since December 2015. The Falcon Heavy derivative, slated for debut in January 2018, groups three Falcon 9 first stages together. SpaceX intends to certify the Falcon 9 to be human-rated for transporting NASA astronauts to the ISS as part of the Commercial Crew Development program. In October 2016, SpaceX CEO Elon Musk announced an upcoming "final upgrade" called Falcon 9 Block 5, which will feature increased engine thrust, improved landing legs, and other minor improvements to help recovery and reuse.