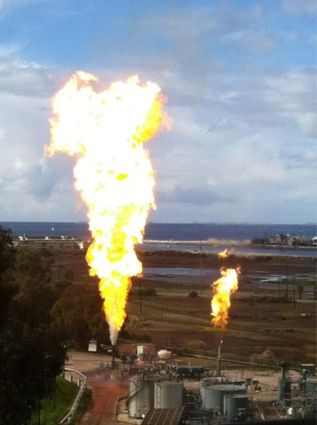 The Playa del Rey gas storage field, owned and operated by Southern California Gas Company, was purchased by SoCal Gas in 1953 as field surplus. The storage facility dates back to pre World War Two years, with active wells having been drilled as far back as the 1930's. It is the oldest gas storage facility in Los Angeles.

Currently, according to Department of Oil, Gas and Geothermal Resources, a division of California public Utilities commission 25 of the 54 wells at the Playa del Rey gas storage field are injection/withdrawal wells used to inject and extract gas. (http://www.cpuc.ca.gov/Environment/info/esa/playa/pdfs/apndx_f.pdf

The method by which the gas is injected uses chemicals, including benzene, which the World Health Organization, has sited has no safe levels of exposure. Benzene is harmful to both human animal health.

Protect Playa Now (PPN), a coalition of local community and environmental groups, including Food and Water Watch, The Ballona Institute, the Neighborhood Council Sustainability Alliance, and Stand - LA, hosted the "Health and Safety Forum," at the Holy Nativity Episcopal Church Los Angeles this past Saturday. (STAND - LA = Stand Together Against Neighborhood Drilling).

The discussion centered on the dangers of living near to the play del rey gas storage facility and the threats it poses to pubic health and the local economy.

According to research from the Protect Playa Now coalition, gas storage facilities, including Aliso Canyon and Playa del Rey are far from benign infrastructure. "They are dangerous facilities that threaten our public health and economy. SoCal gas gets all the profits from these facilities, while we are burdened with all the risk."

The goal is for Los Angeles to make the transition too 100 percent renewables by 2030; the city will be powered entirely by wind, solar and geothermal energy sources. This is the hope of the Protect Playa Now coalition. At the forum, the local presenter, Vlad Popescu said that the purpose of the event was to empower residents with information and avenues to shut down the gas storage facility, which is obsolete. The city of Los Angles does in fact have a plan to transition to clean and 100 per cent renewable energy by 2030.

Atmospheric scientist of UC Davis, Stephen Conley, in a phone interview, said that whenever there are gas storage fields, there could be leaks. To reiterate, it's really only a matter of time before Playa del Rey gas storage field has another explosion.

Playa del Rey residents live within five miles of the gas storage facility. A potential blow out would threaten not only the immediate neighborhood, but also LAX which is less than a mile away.

A methane explosion in Playa del Rey would have a devastating blow to the economy, according to Vlad Popescu, a local resident and presenter at the forum.

Popescu also said that we should not allow ourselves to have such a risky facility in a densely populated area, and feels that it should be shut down.

Great concerns about the gas storage facility built near fault lines were also expressed. The area would not survive an earthquake and Popescu said, "We can't sit and wait to find out"

Why the mentioning of the Aliso canyon blow out was significant in reference to Playa del Rey, is because when the 2015 massive methane leak spewed out of the faulty well in Aliso Canyon gas storage facility, the area surrounding it was mostly mountains. Nevertheless, it impacted thousands of families who had to temporarily relocate from their homes. Since Playa del Rey is much more densely populated, a blow out has the potential to impact thousands of more people.

Dr. Nordella is a physician who continues to study the health impacts on residents living near the Aliso Canyon gas storage facility. As one of the speakers, he presented information about how the 2015 methane blow out impacted the people of Porter Ranch.

In his study, Dr. Nordella found that health symptoms such as headaches, nausea, fatigue, nosebleeds and coughs persisted well into Jan, 2017, a little over a year after the blow out

Dr. Nordella conducted a Volatile Organic Compound (VOC) urine test on the residents. He found that BTEX, chemicals used in fracking were found in the urine samples. There was evidence of the metabolizing of styrene and methylbenzene (PGO).

What Dr Nordella also observed was that the local levels of PGO in Porter Ranch were significantly higher than in the rest of the state of California.

According to a Community Assessment for Public health Emergency response (CASPERO), comments from the field were reported as,

"Several interview staff reported experiencing health symptoms, including throat irritation and wheezing among interviewers at households closest to the well, and exacerbation of asthma symptoms."

Dr. Nordella shared in his presentation that the field interviewers experienced symptoms themselves when visiting the homes of the families afflicted with health issues as a result of the toxins released from the methane blow out.

..."these symptoms improved shortly after the field teams left the sampled homes."...

Also present at the forum was Andrew Krowne, a Health App Developer, and local resident of Porter Ranch. ABC did a segment of Krowne last December 2017.

Krowne developed an app called Environmental Health Tracker (EHT) that is used to track and report health symptoms in your community plus real time alerts.

In the ABC story last year, Krowne said, about his EHT app, 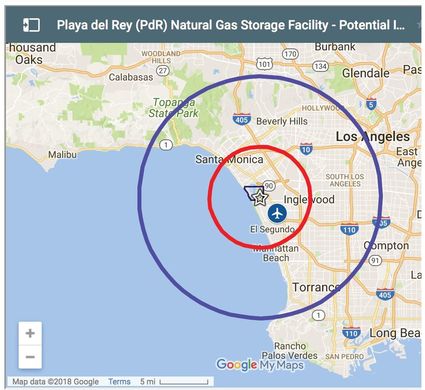 Potential range of an explosion

"What that allows the users to do is to go on their phone when they're feeling a symptom they believe is related to the Aliso Canyon facility, be it a nose bleed, a headache, fatigue, shortness of breath, all those things," Krowne explained.

Their symptoms are kept as part of a centralized data log for all users within an 18-mile radius of the Aliso Canyon storage facility."

At the forum, Krowne encouraged the Playa del Rey residents to download the app so that they too can track and report any health symptoms they may have, due to a potential leak coming for the gas storage facility.

For more information about the health and safety risks of the playa gas storage facility, please visit the website, http://www.protectplayanow.org/