Terminator Salvation/Thor Actor accuses Spielberg and others of "Hollywood Sickness" 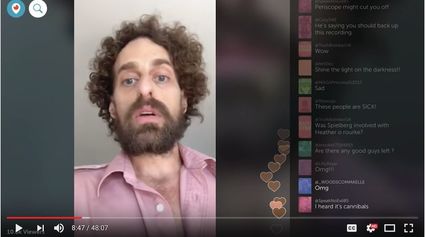 Isaac Kappy is an actor and writer, known for Thor, Fanboys, and Terminator Salvation. In a rambling youtube video, actor Isaac Kappy accuses director Steven Spielberg and others of pedophilia

In a rambling video posted Thursday night on Youtube, Isaac Kappy accuses Steven Spielberg of being a pedophile. "At the top level, these people are just sick and psycho!" he says, mentioning the famous director by name.

Isaac Kappy's personal issues seem perhaps more acute than Spielberg's, based on his performance in the video. It is train of thought, stream of consciousness, skipping from celebrity to celebrity. Kappy includes everyone from Tom Hanks to Michael Jackson "who hated Spielberg!" he says.

"This is what's sad about this. A lot of people are born into it," he says, meaning a broad Hollywood pedophile culture. Kappy also says "Jimmy Saville is a rapist, Claire Bronfman is guilty of abuse."

He accuses the Rothschilds of "cannibalism." Kappy says that Mark Thompson, "who runs the New York Times, ran the BBC for years, and they let him run rampant for years." He regards Pizzagate as having been proven and documented.

"The situation had to punch me in the face before I realized I was in the middle of some crazy [email protected] shit," says Kappy, who does not appear to actually say he had inappropriate relations with Spielberg. He challenges the Director to sue him. "Let's do discovery," Kappy says.

Isaac Kappy is an actor and writer, known for Thor (2011), Fanboys (2009) and Terminator Salvation (2009). In Thor he played "Pet Store Clerk," perhaps not the film's most memorable role.

The allegations are not exactly new. Crispin Glover, who played Marty McFly's father George McFly in "Back to the Future," appears to accuse Spielberg of pedophilia in a lengthy 2013 essay. An excerpt:

"Does Steven Spielberg focus much of his fantasy life on young people? Did he portray children wallowing in sewers filled with fecal matter in Schindler's List? Did he use children to finger paint an adult in Hook? Does he collect the illustrations of Norman Rockwell, such as the one showing a young boy in his underwear examined by a doctor?

Isaac Kappy is an actor and writer, known for Thor, Fanboys, and Terminator Salvation. In a rambling youtube video, actor Isaac Kappy accuses director Steven Spielberg and others of pedophilia

Do Michael Jackson and Steven Spielberg share similar opinions about the sexuality of young boys?"

Spielberg is considered one of the founding pioneers of the New Hollywood era and one of the most popular directors and producers in film history. Allegations of sexual misconduct against him, if verifiable, would be explosive, and would make the Weinstein affair look small in comparison.

Whether or not any of the many allegations contained in the 48 minute video are true or not, one thing can be said for certain: Isaac Kappy will never work in this town again.

The video can be seen in the lower picture box.

where the hell is the article today? all I see are bars across where I presume the article once was?

Here's the surprise: that people are surprised. No, Kappy didn't present us with FILM. But, if you need some stronger proof that big people are FREAKS (many of them), then view this video by someone who was INSIDE a government intelligence agency, and offered TESTIMONY: https://www.youtube.com/watch?v=IClVKyb63m4

Do your own research, people.... these “actors” are into Luciferism, different from Satan worshippers, and prey on young children for their own selfish pleasures. Their surviving victims are finally awakening and will expose the truth. The media won’t touch this because Hollywood owns them, so it’s up to us to start protecting these children!

At least the relevant material was posted. Perhaps it was the only way to get it through. Even if weakly, the author at least acknowledges it is possibly true. One step at a time folks

Santa Monica Observer = you will be held to account for shaming the kiddie diddler whistle blowers.

Tick...tick...tick... The house is falling on (un)Holywood, et al. Look for major financial losses, and really, really bad things for these pedos and the gate keepers who protect them.

Just even the the title the writer gives here, Kappy 's Rambling Video. Instead of titling it Pedophiles in Hollywood and list names in Bond print. Non of his accusations are front page news, makes you wonder, why it's not being picked up.

So happy to see people inside the industry (Corey Feldman, River Phoenix, Corey Haim, Mel Gibson, Robert Downey Jr and others) speaking out about this sick disease that controls Hollywood's politics. The author of this report sounds like they want to be pals of Hollywood vs investigating for truth. The incredulous tones are palpable. Thanks to POTUS for signing EO on Dec 21, 2017 that is pursuing these monsters.

The author of this article should consider which side of history he wants to be on. We need media sources to participate in protecting these children. When the full truth comes out the public will come looking to the media and asking WHY DID YOU HELP COVER THIS UP? https://mobile.twitter.com/anopensecret?lang=en

You've got a whole army with you, Isaac. Keep exposing these people for what they are. & we know that there are many.

In a world of fake news it was refreshing to see unbiased REPORTING which is what a journalist should do. Report. Let the reader decide what to do with the information read. Thanks

Hollywood is infested with pedophiles and s Satanists along with those in highest government. Bravo, Isaac and thank you.