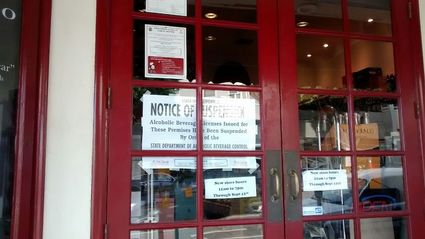 A sign in the door informs customers that Fireside Cellars has had it's alcohol license suspended by the California State Depart of Alcoholic Beverage Control (ABC). It is unknown why it was shut down--whether they violated the law by selling to minors, or simply didn't pay their fees on time.

The ABC was created by constitutional amendment effective January 1, 1955, as an independent department of the executive branch of the state government. The Board of Equalization no longer has any responsibility in liquor control matters except as a taxing authority.

The department is headed by a director appointed by the Governor of California, and its two divisions are divided into districts based on population and geographical needs.

ABC has the exclusive power, in accordance with laws enacted, to license and regulate the manufacture, importation and sale of alcoholic beverages in California. It also has the power for good cause to deny, suspend or revoke any specific alcoholic beverage license.[4]