Mountain Lion P-64 Survives the Woolsey Fire, But Dies from Burns on his Paws

He had crossed the 101 freeway multiple times, Survived Flames, But Dies Weeks Afterward 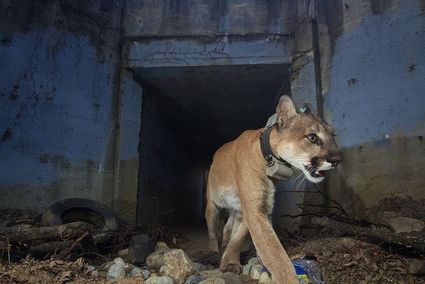 P-64 was approximately four years old and was first captured in February 2018.

THOUSAND OAKS, Calif. -- Earlier this week, National Park Service (NPS) researchers discovered the remains of P-64, a male mountain lion who survived the flames of the Woolsey Fire, but died a few weeks afterwards. Although the cause of death is not known at this time, P-64's paws were visibly burned. The California Department of Fish and Wildlife will conduct a necropsy.

"P-64 was a fascinating cat to study because he crossed our notoriously deadly freeways dozens of times," said Jeff Sikich, biologist for Santa Monica Mountains National Recreation Area. "It's very unfortunate that he was seemingly so successful surviving in this fragmented landscape and then died in the aftermath of a devastating wildfire. It's of particular interest that he chose to travel back through a fresh burn area rather than retreat through urbanized areas to escape the fire."

When the fire broke out on the afternoon of November 8, P-64 was in the Simi Hills, north of Oak Park. He continued to travel throughout the Simi Hills for the next few days, covering several miles before then hunkering down in a remote area. The amount of distance he traveled, combined with the fact that the biologist located P-64 on November 26 with a telemetry device in an unburned portion of the Simi Hills, boosted hopes that P-64 may have been on a kill and surviving.

The last GPS point transmitted by the collar was on November 28, but the collars commonly go multiple days without connecting to the satellite and transmitting points. Hopes were dashed, however, when Sikich hiked in to the location of the last GPS point on December 3 and found P-64's remains nearby. He appeared to have been dead for a few days.

P-64 was approximately four years old and was first captured in February 2018 in cooperation with The Boeing Company at the Santa Susana Field Lab in the Simi Hills. Also known as "the Culvert Cat," he surprised researchers by using a long and narrow storm drain multiple times to cross under the 101 Freeway near Liberty Canyon in Agoura Hills.

During the nine months that he was tracked by NPS researchers, he crossed the 101 and 118 freeways a total of 41 times (14 times across the 101 and 27 times across the 118). His home range consisted of the northern Santa Monica Mountains, the Simi Hills, and the southern Santa Susana Mountains. Although DNA testing is still needed for verification, he is the suspected father of four female kittens born in May of 2018.

Of the 13 mountain lions tracked by NPS researchers in the region, 11 were in or around the fire perimeter. Of those 11, nine have survived the fire and appear to be moving normally. P-74, a young male mountain lion, is believed to have perished during the fire or its immediate aftermath.

The Woolsey Fire burned 88% of NPS land in the Santa Monica Mountains and 47% of the total land within the recreation area. 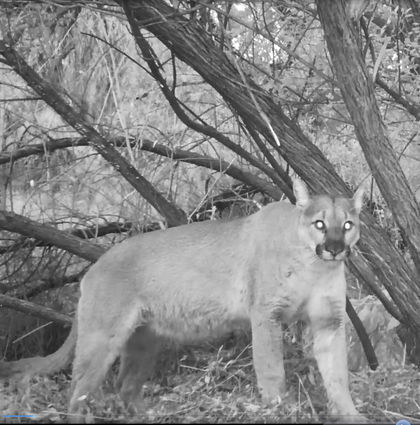 Also known as "the Culvert Cat," P-64 surprised researchers by using a long and narrow storm drain multiple times to cross under the 101 Freeway near Liberty Canyon in Agoura Hills.

Santa Monica Mountains National Recreation Area (SMMNRA) is the largest urban national park in the country, encompassing more than 150,000 acres of mountains and coastline in Ventura and Los Angeles counties. A unit of the National Park Service, it comprises a seamless network of local, state, and federal parks interwoven with private lands and communities. As one of only five Mediterranean ecosystems in the world, SMMNRA preserves the rich biological diversity of more than 450 animal species and 26 distinct plant communities.