Men Really Can Chase Women in Santa Monica, Police Say. Even With Weapons 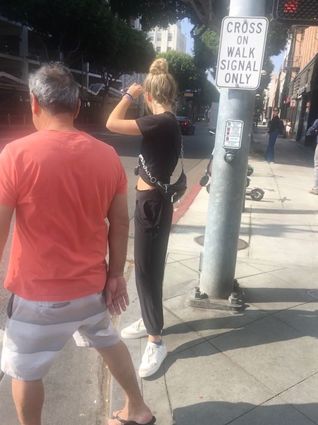 A woman waits for the light at Third Street and Broadway in Santa Monica. People pictured were not involved in the events described in this story

A news story in the SM Daily Press about the arrest of Alfonso Flores, 45, in the early hours of January 12 has sparked a firestorm on social media platforms Nextdoor and Facebook regarding actions taken by the Santa Monica Police Department.

According to the news report, on January 12 in the early hours of the morning, a woman walked up to police officers at 3rd Street and Broadway and requested assistance regarding a man who'd been following her. The police discovered, upon approaching and speaking to the man, Alfonso Flores, that he was on probation for fraud. After searching Flores, they discovered a bank card and a bottle of prescription pills - both issued to a person other than himself. Flores was then arrested for Identity Theft, Possession of Methamphetamine and Possession of a Controlled Substance without a Prescription. Bail was set at $50,000.

What has created the outrage among Santa Monicans on social media is a report from a resident that she had already encountered Flores during the previous summer when he had chased her at 4:15 am to her front door. The resident of the Wilmont neighborhood, Gwen Neidlinger, claims in a posting on Nextdoor that she had been walking her dog when, upon turning around, she found herself face to face with a strange man. He appeared to be indicating to her that he had a weapon under his shirt, so she ran toward home. Neidlinger says she called 911 as she was running. The police showed up quickly and apprehended the man.

Neidlinger felt some relief until, upon checking the crime reports online the next morning, she discovered the incident had been listed as "suspicious person, checks ok." The disposition of the subject was that he'd been "let out of car" - directly across the street from her house. Neidlinger also discovered the man, Alfonso Flores, was on probation.

According to her post on Nextdoor, Neidlinger then called the police, upset at discovering her would-be assailant, a parolee, had been released across the street from her house. She was even more upset after learning Flores had been in possession of a pocket knife. She requested the police file a police report. "They were very reluctant," Neidlinger writes, and they told her there had been no crime. After three visits with the police, Neidlinger convinced them to write some sort of report, and the police told her they were serving him with an arrest warrant.

She heard nothing more about the matter until reading the article about the same man having followed a woman on January 12.

Neidlinger and others on social media would like to know why Flores had been allowed to walk the streets after he'd threatened her.

In response to a request for information about Flores's possible attempt to attack Neidlinger last summer, Santa Monica Police Lieutenant Saul Rodriguez asserts that "the case was investigated by our detective bureau." He says that on August 22, the case was filed with the City Attorney's office as a prowling offense. In mid-October, 2018, Flores was arrested on a warrant for this case. However, Rodriguez continues, "On 11/15/18, the court granted the people's motion to dismiss the case in the furtherance of justice per 1385 PC and dismissed the case." 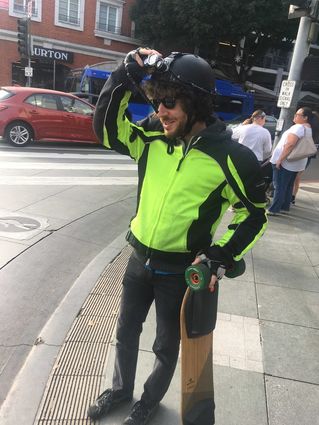 A woman waits for the light at Third Street and Broadway in Santa Monica. Man pictured was not involved in the events described in this story

On the other hand, Flores committed no outright crime the summer he encountered Gwen Neidlinger at 4:15 in the morning. He had as much right to be on the street as she did. Unfortunately, nonverbal and subtle clues that he intended to rob or assault her would have been impossible to prove and not enough to bring a conviction for an alleged offense of assault. Flores was on the public thoroughfare, so even a charge of Prowling would not have flown. Therefore, the City's Attorney office requested a dismissal of the case.

Lieutenant Rodriguez made clear that Flores's present arrest on January 12 was not in any way connected to the threat felt by the woman who brought him to their attention that night. "As noted in the charged, he was not arrested for Stalking 646.9 PC; but for what the officers discovered when the subject was contacted." That is, the bank card and pills that did not belong to him.

Please correct the statement made at bottom, Flores was on the public thoroughfare, so even a charge of Prowling would not have flown. Therefore, the City's Attorney office requested a dismissal of the case. It was me that was chased, right into my private property and up to my front door, all private property and posted as such. They know that, they have the video I provided them! How dare they lie their way out of this

I am the woman that was chased in this article. He most certainly was not on public thoroughfare as the office in the article claims. I gave them a video of him running after me , through our private front gate, right up to my front door. All private property. TRESPASSING. NOT PUBLIC THOROUGHFARE. They know that, because I gave them the video.