Bonnie He at the Santa Monica Playhouse 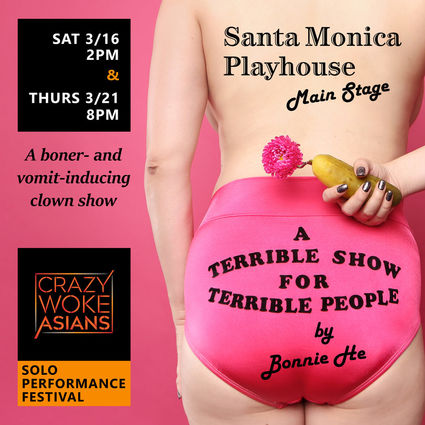 Bonnie He at the Santa Monica Playhouse

Physical comedian Bonnie He takes the audience on an flirtatious journey from death to rebirth, opening a voyeuristic window into personal tragedy, triumph, and titillation, at the Santa Monica Playhouse, as part of the Crazy Woke Asians Solo Performance Festival, the first all Asian American festival at that venue.

A Terrible Show for Terrible People received rave reviews in sold-out shows at the Hollywood Fringe Festival as a variety act featured in The Color Collective show. Dana Martin of Stage Raw said of one piece, "Some of the evening's highlights include a hilarious, irreverent burlesque act performed by Bonnie He." At the NY Clown Theater Festival at The Brick in Brooklyn, Jim Moore of VaudeVisuals reviewed, "Bonnie is wonderfully 'seductive' in a very comical way that garnered the audience's laughter."

"Boys are stupid. Why should they have all the fun?" Bonnie asks in her irreverent romp of a one-woman show. Bonnie He is a an actress, an improviser, and a physical comedian and clown. Her acting credits include a short film with Maggie Gyllenhaal in "The New Empress." She is an improviser on the Second City Hollywood house team, Excelsior! She's an LA native.

Bonnie will be performing her clown show twice in the two-week festival produced by Crazy Woke Asians, an Asian-centric LA-based comedy show that always sells out. A Terrible Show for Terrible People will be the only clown show at the Solo Performance Festival. Other acts include stand-up and storytelling. The Santa Monica Playhouse is co-producing the festival.