Residents left to ask, What the hail? as ice covers streets and backyards ever so briefly in LB

It may have been the firs day of spring; but Long Beach, California, was his with a hailstorm on Wednesday, March 20. The hail was so thick it looked like snow, but quickly evaporated in the So Cal sun which followed. 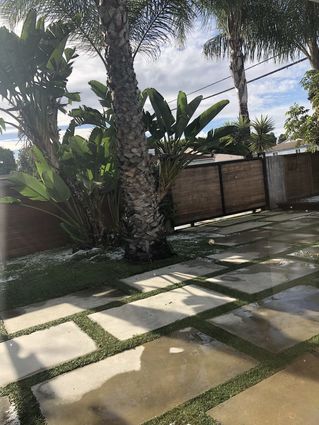 They say that March comes in like a lion and goes out like a lamb. Same Long Beach porch a little later.

Beaches and streets in Southern California suddenly turned white, stunning residents who quickly ran outside to get a picture or play in the unusual weather. No one could remember the last time it hailed in Long Beach.

The hail was reported in Huntington Beach and Long Beach, a city of 600,000 south of Los Angeles.

"Upper-level energy associated with Winter Storm Thor has been triggering thunderstorms along the California coast since this past weekend," said weather.com meteorologist Chris Dolce. "These thunderstorms produced small hail that whitened the ground in parts of the Bay Area on Saturday and did the same in Southern California on Monday."