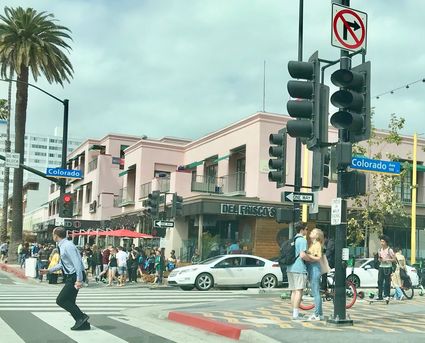 The Kiss at Colorado and Ocean Avenue: should singles completely replace families downtown?

The City Council is concerned about the apparent proliferation of small apartments in downtown Santa Monica. At the 3/26 Meeting, the Council banned construction permits for more apartments less than 375 square feet, unless they are "affordable." Which in Santa Monica means, you know, less than $2000 a month for one room.

Developer WS Communities recently filed plans to construct 363 Single Resident Occupancy (SRO) units, in six proposed apartment buildings on Fifth, Sixth, and Seventh streets. It is unclear whether the moratorium would apply to these 363 units. Probably not, since the applications have already been filed, and so the applicants now have a vested legal right to construction under current standards.

Five percent of these units would be set aside as low income. The remainder would rent for market rate. Rent for a 340-square-foot studio at one of WS's buildings on Lincoln Boulevard is listed on their website at $2,915.

The Council is alarmed that single men working for high tech companies like Google, will basically replace families in downtown Santa Monica. Which has kind of already happened, but whatever.

Google will add 5000 employees starting in 2021, in the building formerly known as the Westside Pavilion.

Councilmembers Kevin McKeown and Gleam Davis, disavow complete opposition to SROs. "I actually believe that SROs are a valid part of the mix of housing for the city of Santa Monica," McKeown said. "[But] all of the sudden we'll have all of these SROs, and it will take us forever for us to catch up on [building] two and three bedrooms."

Separately, the Council budgeted $8 million to engage ten or fifteen outside Marketing firms to be "on call" to promote City projects (Agenda Item 3-D).

"Mayor Ted Winterer supported Cole's PR enhancement plan. Winterer is the Marketing Manager for Maser Condo Sales where he is also a salesman," she added.

"This is a new direction we are taking!" Winterer said. "Instead of coming up with an individual RFPs (Requests for Proposals), these agencies are on call," which would presumably be cheaper for the City.

"This is a new direction we are taking!" Winterer announced. "Instead of coming up with an individual RFPs (Requests for Proposals), these agencies are on call!"