SMFD Rescues Homeless Person Who Falls From Palisades Park at 1:30 am Tuesday 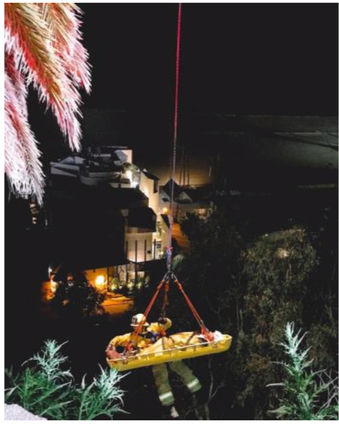 4/16/19: Santa Monica Fire Department says it rescued a homeless man who fell down the bluffs at 270 Palisades Beach Rd, and was trapped approximately 100 feet down the cliff.

The SMFD had 4 engine companies and some 40 firemen involved in the rescue. Which was overkill, but it's not like the guys had anything else to do at 3 am on a Tuesday morning.

The SMFD press release reads as follows: On Tuesday morning, April 16, 2019 at 2:46 a.m., Santa Monica Fire Department resources including Engine 1, Engine 2, Engine 6, Truck 1, Rescue 1, RA-2, USAR-2, Battalion 1, responded to a report of a person who fell down the bluffs in the area of 270 Palisades Beach Rd, and was trapped approximately 100 feet down from the edge.

Palisades Park is a 26.4-acre park in Santa Monica, California. The park is located along Ocean Avenue on top of the coastal sandstone bluffs, offering breathtaking scenic views of the Pacific Ocean and the coastal range. It extends over from the Santa Monica Pier at its southern end to Adelaide Drive at its northern end. It is lined with more than 30 varieties of plants and trees, including eucalyptus, pine, palm, and fig trees.