'A Culinary Journey through Asia', Curated by Famed Chef and Restaurateur, Helene An 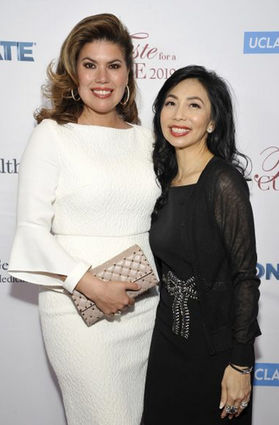 Tania Thicke and Elizabeth An attend Taste for a Cure held on Friday, April 26. This year's theme is 'A Culinary Journey through Asia', curated by famed chef and restaurateur, Helene An, of House of An and Crustacean Beverly Hills.

April 29- Beverly Hills-The Beverly Wilshire Hotel was host to the UCLA Jonsson Cancer Center Foundation's signature event, Taste for a Cure held on Friday, April 26. This year's theme is 'A Culinary Journey through Asia', curated by famed chef and restaurateur, Helene An, of House of An and Crustacean Beverly Hills.

Taste for a Cure unites the entertainment and epicurean communities and consistently ranks among the top ten culinary events in Southern California. This year's theme was "A Culinary Journey through Asia," and featured tastings, wineries and distillers, as well as a sumptuous array of dishes from some of Los Angeles' top Asian and Asian-influenced chefs and restaurants, all while raising valuable funds for leading-edge cancer research at the UCLA Jonsson Comprehensive Cancer Center (JCCC). "A Culinary Journey through Asia" is curated by Helene An, Crustacean, Hinoki and the Bird, Blackship, Modern Chinese and more. This year's event will also included delicious wine, sake, Japanese beer and whiskey; sensational Entertainment, and a Live Auction.

During this special evening, the 2019 Gil Nickel Humanitarian Award will be presented to Sandra Stern, President of Lionsgate's Television Group.

The Soiree kicked off with a wonderful food fest reception presented by a number of popular restaurants in the Beverly Hills and Los Angeles area. Spearheaded by House of An and its flagship Crustaceans, wonderful selection of dishes were provided by eateries. Selections of top wineries from California as well as international were also present to provide refreshing libations that perfectly paired up with the great dishes that were served. Guests had a great time enjoying the great food and drink before being ushered into a gorgeous ballroom decorated perfectly and had some more inviting dishes waiting for them.

Soledad O'Brien, award-winning journalist and philanthropist who stars in the Hearst Television political magazine program "Matter of Fact with Soledad O'Brien", hosted the evening. This evening was special, as the 2019 Gil Nickel Humanitarian Award was presented to Sandra Stern, President of Lionsgate's Television Group. Stern's award was be presented by Brian Tannenbaum, who spearheads alternative programming for Jeffrey Katzenberg's Quibi content team and is a former longtime Lionsgate executive.

Sandra Stern has been a key member of Lionsgate's senior management team for the past 16 years. She has helped guide the company's business to record-breaking revenue growth during nearly every year of her tenure and has been instrumental in tripling the size of the television slate, which encompasses nearly 70 series on dozens of different U.S. networks and platforms. One of the industry's consummate dealmakers, Ms. Stern has innovated groundbreaking linear and streaming platform deals for Lionsgate's iconic series, including Mad Men (AMC), Orange is the New Black (Netflix) and The Rook (Starz). She also paved the way for Step Up: High Water to become the first original series for YouTube Premium and spearheaded a deal enabling the anthology series Manhunt to transition from Discovery to Charter.

Stern was named "Multichannel News Wonder Woman of the Year" in 2017. She was also awarded the UCLA Law Alumnus of the Year in 2015. Among many accolades, she has been named one of the "Women in Entertainment Power 100" by The Hollywood Reporter for the last 12 years and received American Film Institute (AFI) awards in 2014 and 2015.

To conclude, this years Taste for a cure was a wonderful event that raised awareness and great funds for a great cause, guests thoroughly enjoyed the food and libations that were curated for them and everyone rocked the dance floor with fantastic music from Ryan Tedder of One Republic.

Founded in 1945, the UCLA Jonsson Cancer Center Foundation (JCCF) is the single most important vehicle for raising private funds for cancer research at UCLA. It supports a number of high priority cancer research efforts, focused on converting laboratory discoveries into more effective therapies for cancer patients. The UCLA Jonsson Comprehensive Cancer Center's (JCCC) dedicated researchers are recognized as international leaders in the discovery of new and better ways to prevent, detect and treat cancer. In the past four years alone JCCC research has led to 11 FDA approvals for new cancer treatments. A remarkable achievement. For information on UCLA's JCCF, please visit http://www.cancer.ucla.edu.