Santa Monica to Pay $85,000 Annually to Consultant to Track the Homeless

Maybe the City could pay the homeless $85,000 to pull weeds, instead of using Monsanto. Just saying 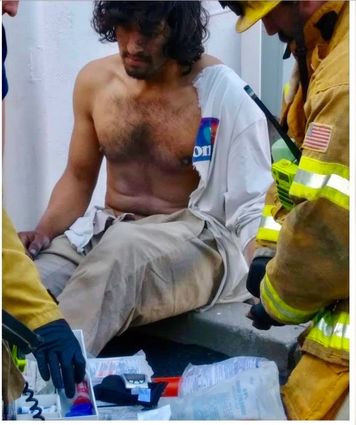 This homeless man was trapped between buildings, then released by Santa Monica police. He was treated and released, and not charged with a crime.

City staff are asking the Council to contract with an outside consultant to manage their homeless tracking system. In order for the City to receive federal funds for homelessness, they are required to maintain a standardized Homeless Management Information System (HMIS). Until 2014, the City used its own employees to man the system but then decided it would be more effective to hire outside help. The "scope of work and necessary expertise was not suited to the level of the budgeted position, which resulted in frequent turnover," according to the staff report.

The proposed contract with outside consultant Pathways MISI would be for $85,000 per year with four one-year renewal options. The total amount is not to exceed $425,000. Presumably, at the end of five years, Pathways will negotiate for a higher fee to manage the HMIS system over the next five-year span. It is unlikely there will not be people living on the street in Santa Monica in five years - or ever.

The HMIS is used by 250 people, working either at City Hall or at local non-profit agencies. It is used to provide "a holistic view of an individual's history, needs, accomplishments and challenges," according to the staff report.

Supposedly, the information thus collected can be aggregated to "identify emerging needs, gaps in services and effective programs." This will lead to recommendations to change policies or funding levels.

This is all hooey, of course. This computerized database is just another way the city - and in this case the federal government as well - spend money in an effort to look like they are doing something about homelessness. All they are actually doing is collecting data. The requirement to use HMIS software comes from a 2009 law known as the HEARTH Act. The intention was for communities to be able to use the information to establish funding priorities. 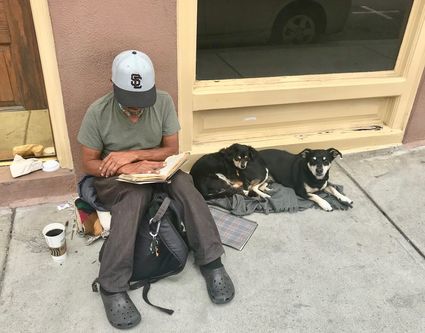 As his 2 dogs warily watch, a homeless man reads the Bible outside Starbucks on Main Street and Ashland Avenue.

But having data does not necessarily result in solving problems. It is necessary to do something useful with that data. In 2009, when the requirement to use HMIS was enacted, there were 48,000 homeless people in Los Angeles County. In 2018, nine years of HMIS-collection later, there were 52,000 homeless in LA County. Not only is this a larger total number, but it is even a larger percentage of the total population.

It is abundantly clear to anyone strolling through Santa Monica and viewing the many, obviously mentally ill, or substance addicted people living on the street, that more needs to be done than collect data or even change policies or funding levels. These people need immediate, hands-on (possibly literally) intervention. They need to be taken off the street, put into situations where they are sheltered, treated, and kept from harming themselves or others.

And then there will be no need to track their life on the street.

For now, the City has no choice but to employ the data-collection software, but they should not be relying on it to solve any problems whatsoever. The only way to do that is to cease tolerating human beings living on the street.