After 4 Failed Attempts at Brexit, Theresa May Resigns as British Prime Minister

"[I am] the second female prime minister, but certainly not the last," she said, breaking into tears at the end of her speech. 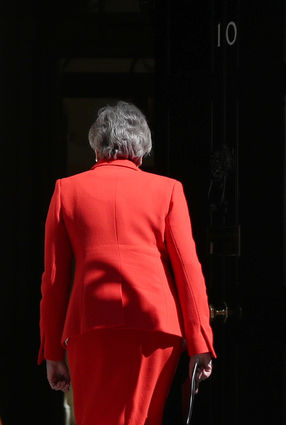 24 May 2019, England, London: British Prime Minister Theresa May leaves after making a statement in front of 10 Downing Street. May says she will step down as leader of her Conservative Party on 7 June.

London (dpa) - British Prime Minister Theresa May on Friday announced that she will step down as leader of her Conservative Party on June 7, accepting that she failed to broker a deal for Britain to leave the European Union.

"It is and will always remain a matter of deep regret to me that I have not been able to deliver Brexit," an emotional May said outside Downing Street.

It had been the "honour" of her life to serve as prime minister for nearly three years, she added.

"[I am] the second female prime minister, but certainly not the last," she said, breaking into tears at the end of her speech.

May will remain as prime minister until a new Conservative leader is elected by the party's lawmakers and members, a process expected to take up to two months.

The new party leader will then succeed her as prime minister.

In Washington, US President Donald Trump said he felt "badly" for May, describing her as a "very strong" person who worked hard.

"It's for the good of her country," Trump said outside the White House. "I like her very much. In fact, I'll be seeing her in two weeks," Trump added, referring to his scheduled visit to Britain from June 3.

Calls from Conservative eurosceptics, who were unhappy with her Brexit deal, had grown for May to resign in recent months.

She was forced to agree in March that she would step down once parliament had voted for a fourth time on the deal, after rejecting it three times. However, the fourth vote was never scheduled due to dissatisfaction in her own cabinet.

Last month the EU granted Britain a six-month extension to leave the bloc, in the hope lawmakers could break their impasse. The new date is October 31.

"The European Research Group, the right wing of my party, have finally got their woman," veteran Conservative lawmaker Ken Clarke told the BBC earlier.

Speaking to the broadcaster again after May resigned, Clarke said she had been "cruelly treated" by her party.

"We've had three months of a botched assassination," he said.

"Theresa May is a woman of courage for whom he has great respect," Andreeva said, adding that the commission's position on Brexit has not changed.

Merkel always worked with May in a spirit of trust and would continue to do so for as long as May is in office, Fietz said. 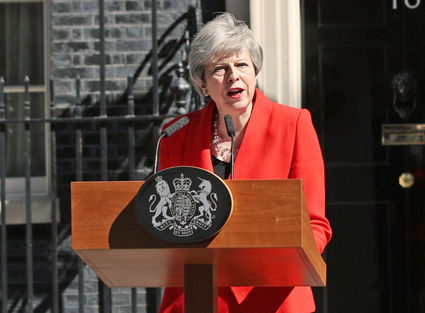 24 May 2019, England, London: British Prime Minister Theresa May speaks during a press statement in front of 10 Downing Street. May says she will step down as leader of her Conservative Party on 7 June.

French President Emmanuel Macron praised May for doing "a courageous job of implementing Brexit in the interest of her country."

Brexit Party leader Nigel Farage, one of May's fiercest critics, tweeted that it was "difficult not to feel for Mrs May, but politically she misjudged the mood of the country and her party."

Labour's Jeremy Corbyn, who leads the main opposition, said May was "right to resign," calling for an immediate general election.

Former foreign secretary Boris Johnson, the favourite to succeed May, has already announced his intention to stand.

"Thank you for your stoical service to our country and the Conservative Party," the pro-Brexit Johnson tweeted. "It is now time to follow her urgings: to come together and deliver Brexit."

Some centrist Conservatives have vowed to oppose Johnson and try to prevent any attempt by him or other eurosceptics to take Britain out of the European Union without a withdrawal agreement.