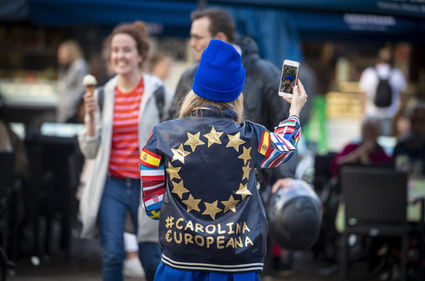 Voters in Czech Republic, Ireland head to the polls in EU elections

Those totals, based on partial results, mean the two biggest blocs fall short of their traditional combined majority. Still, their party-list candidates insisted their groups were the best placed to form majorities in the new parliament.

"There is no stable majority without the EPP, and that's why the EPP is ready for compromise," said German lawmaker Manfred Weber, referring to his centre-right European People's Party (EPP), which won 179 seats - a loss of 37.

Meanwhile, the Socialists and Democrats won 150 seats - a loss of 35. Their party-list candidate, Frans Timmermans of the Netherlands, said the result meant "we have to be humble."

"We have to be clear what our program is going to be," added Timmermans, a European Commission vice president. "I will repeat my proposition to work with other progressive parties ... to try and build a program that addresses the aspirations, the dreams and also sometimes the fears of our fellow Europeans."

By contrast, the liberal ALDE group made significant gains, boosting its ranks to 107 seats, including the Renaissance list of French President Emmanuel Macron.

The Greens were fourth-placed with 70 seats, coming on the heels of strong results in a number of countries. In Germany, they eclipsed the Social Democrats to come in second place, around 21 per cent.

"I have worked with breaking monopolies," the Dane said. "And this is also what voters have been doing today, [so] the monopoly of power is broken."

The selection of the commission president and other top EU posts will result from negotiations after member states submit their nominations and the European parliament ratifies the final picks in the coming months.

EU leaders will already meet on Tuesday to begin this complex process of political horse-trading.

Another main story of the election was the surge in turnout across the bloc. Provisional estimates from all 28 EU member states show turnout at 50.95 per cent, just over eight percentage points higher than in 2014, putting to an end the long-term trend of declining turnout.

Results for the three main far-right groupings in the outgoing parliament were lower than some projected. They can count on an overall 172 seats, or about 23 per cent of the new legislature.

While that figure could change as further results come in and the groups reconfigure, some projections had initially suggested a total share of 30 per cent or more.

The elections lasted four days and were open to than 400 million eligible voters, in what is being billed as the world's biggest trans-national elections. They come at a time of soul-searching over Britain's planned departure and amid threats from within and outside the bloc.