According to local rumors, the Nazis hid trains laden with war booty in a tunnel as the Soviet Army advanced at the end of World War II. 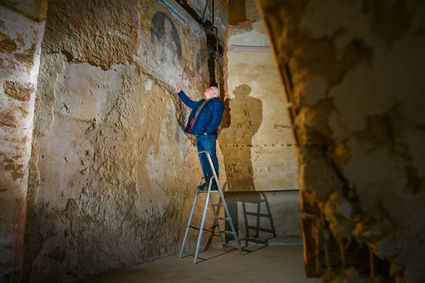 The paintings on the wall at Struga Palace in Poland are estimated to be 500 years old.

Walbrzych, Poland (dpa) - It was totally unexpected when Piotr Koper, who recently became infamous for his search for a mythical Nazi train laden with gold, found another sort of treasure.

During the renovation of a manor house, he discovered a series of centuries-old paintings of Bohemian and German rulers.

"Suddenly I was staring an emperor in the face," Koper laughs.

The building developer has spent the past 11 years renovating Struga Palace in south-western Poland, although Koper is far better known for his unsuccessful attempts to find the armored gold train.

According to local rumors, the Nazis hid trains laden with war booty in a tunnel as the Soviet Army advanced at the end of World War II.

There are lots of underground tunnels in the region around the village of Struga. The Nazis built a huge complex there known as Projekt Riese (Project Giant).

Excavation experts and historians doubt the existence of the gold train.

However, three years ago, amateur historian Koper made an expensive attempt to find the train and began digging. Aside from intense media excitement, his search failed to produce anything.

Now he's having more success in his renovation work at the 700-year-old manor house, where he spotted traces of colour underneath the plaster of the former ballroom.

"I removed it carefully," he says, describing the moment in which he discovered the 500-year-old paintings. "It was very emotional."

For the manor's owner, Krzysztof Wieczorek, the portraits are a real treasure.

The paintings, which are spread along a 50-square-metre section of wall, are quite unique, he says.

They were created between 1560 and 1570, and as yet, experts have uncovered nine of what are thought to be 22 pictures.

"Most of the paintings are still covered up," says Wieczorek.

Removing the layer of plaster without damaging the paintings is a huge challenge for the restorers. "It's unbelievably precise work using a scalpel," says Wieczorek.

The Pole sees saving the manor from disintegration as his personal mission and is having it painstakingly restored.

"The pictures are breathing a second life into the palace," he says, adding that he hopes to allow visitors in to see them at the end of next year.

Koper is also very happy with his find. "It's something tangible," he says, comparing it to his fruitless search for the gold train. 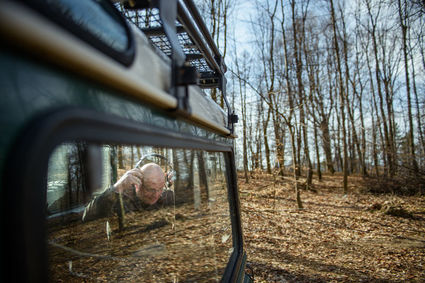 Piotr Koper, an amateur historian, prepares his devices for treasure-hunting in his car in a forest in Poland. He gained fame for his fruitless search for a Nazi train of gold.

However, he still hasn't lost hope on that front.

"I certainly haven't put the matter to one side," he says, his eyes lighting up.

Indeed, he's been working on a new plan. However, he won't be digging at kilometre 65 of the Wroclaw–Walbrzych line, the site of the 2016 dig and to where he was led with the help of ground-penetrating radar equipment. Too expensive, he says.

For his latest plan, however, he will still need a lot of money - he hopes to raise 60,000 euros (67,000 dollars) with the help of his gold train foundation.

He and his German fellow treasure-seeker Andreas Richter spent tens of thousands of euros on the first project.

Richter left the team last year, but Koper remains as enthusiastic as ever.

"I'm going to start digging in another spot," he says. But he won't say where. "Otherwise the masses would start rushing there tomorrow.