In the midst of Brexit, the President executes a long planned trip to the United Kingdom 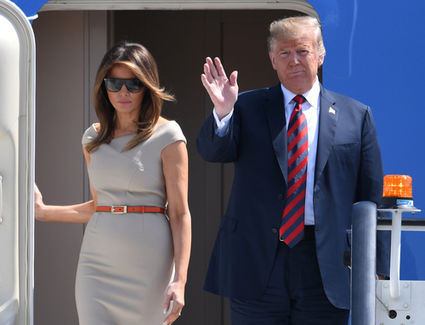 US President Donald Trump and his wife arrive arriving at London's Stansted Aiport 12.7.2018

Washington (dpa) - US President Donald Trump will begin the first day of his three-day visit to Britain on Monday by meeting with the Royal Family and lunching with Queen Elizabeth II at Buckingham Palace.

The visit, planned months ago to commemorate the 75th anniversary of the D-Day landings, comes as Britain remains in the throws of the Brexit process and British Prime Minister Theresa May's plan to resign her position on Friday.

Even before arriving, Trump had already waded into the Conservative Party's leadership turmoil, voicing his support for Brexit hard-liner Boris Johnson.

The president's first day in London will be greeted with protests.

During the banquet at Buckingham Palace in central London, hundreds of protesters plan a rival "people's banquet" a few hundred metres away in Parliament Square.

Following his lunch with the Queen, the president and his wife, First Lady Melania Trump, will visit Westminster Abbey and lay a wreath at the grave of the Unknown Warrior.

Melania will take afternoon tea with Prince Charles, the heir to the throne, before a state banquet on Monday evening.

On Tuesday Trump will meet with May - days before she steps down as prime minister - and meet with American and British business leaders.

Trump's visit to Britain will be capped on Wednesday with a large ceremony in the southern city of Portsmouth to mark the the D-Day landings in 1944, when some 160,000 British, US, French and other Allied troops landed in Normandy, in German-occupied western France, in World War II.

The president will then travel to Ireland and France.