"Happiness: Capitalism vs. Marxism" Less Than the Debate of the Century Between Jordan Peterson and Slavoj Zizek

Neither man made much of a case for either Marxism or capitalism, or really understood fulfillment 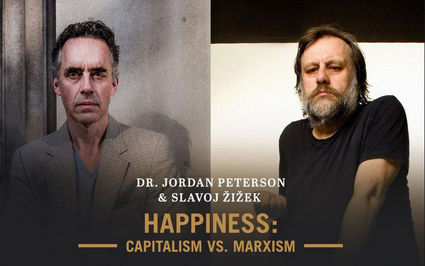 I'm a member of the choir of Jordan Petersen's revolt against identity politics, intersectionality, political correctness and the neo- Marxist, neo- Stalinist idea of equal outcomes. Yet there was not a lot of that during this evening.

Touted as the "Debate of the century", the bout between Jordan Petersen and Slavoj Zizek was less than eventful. Termed "Happiness: Capitalism vs. Marxism", young minds gathered in Toronto to determine who could win over the audience with their wit and might. Regretfully, neither seemed to hit the mark.

The fault lies in the topic itself.

In essence, none of the speakers actually addressed the topic "Happiness". Neither Capitalism nor Marxism leads to happiness. Any spiritualist or philosopher will tell you this. Happiness is an inside job. It's a state of being, a state of presence when you are full with content and joy as account of one's connection with divine source and the universe a large.

I'm a member of the choir of Jordan Petersen's revolt against identity politics, intersectionality, political correctness and the neo- Marxist, neo- Stalinist idea of equal outcomes. Yet there was not a lot of that during this evening.

My real issue was that neither spent any great deal of time making a case for either Marxism or capitalism.

Coming to the topic of Capitalism, I must say Zizek was more prepared with his viewpoints and presented better thought of arguments. Usually too weird to really appreciate with what he presents, he was surprisingly clear and concise.

At one point he made the audience laugh when he asked Petersen, I'm not asking you just to make a point that you are stupid and don't know what you are talking about, but can you tell me, who are these Marxists"? Not realizing that this delusional idea of Marxist utopia has seeped into all levels of society especially academia and some media and is prevalent in the social sciences creating all sorts of confusion.

Zizek's big flaw was he kept using China as an example of a communist system that has made them a super power today, failing to realize that in fact it was china's free market reforms and capitalistic fiscal policy that got them into the industrial revolution. Not their totalitarian dictatorship governance. It was a self- goal in way that Petersen was quick to point on.

But the point that I found most unpalatable was the tacit ignorance and arrogance that came from Zizeck when he started discussing religion. He went on to discuss a very distorted view of eastern philosophy both Hinduism as well as Zen Buddhism. He made distorted comments such as the fact that he was most shocked to discover some of the inspiration and motivation that came for the Nazi party in Germany- the Bhagavad Gita. He was apparently baffled that the SS soldiers were reading the Gita and getting some spiritual inspiration for not just the idea of "Aryan"- a so called "pure" race, but also war itself. These concepts have long been debunked. There is no such thing as Aryan or the Aryan race. There is a Sanskrit word called Arya- which means noble. Hitler had read the gita and seemed to have a very twisted and distorted view of it, not just with Aryan race but also the Swastika- which he adopted as the symbol for his party in its inverted form. Many German indologists have also analyzed Hinduism from their own German lens- which tended to be racists, bigoted and very narrow and that had led to now debunked theories such as Aryan Invasion theory. This is a theory that claims that it was Europeans that came to India and taught the Hindus the spiritual philosophy and wisdom. None of this has turned out to be factual or accurate considering that Europe was not even around at this time and the Indian civilization predates the west by 3000 years.

Zizek's other argument was that he was surprised to find a lot of violence within Zen Buddhism. That the spiritual wisdom in Buddhism made the samurai warriors at the time have total acceptance of life and death. That somehow in the concept of the Leela- the Divine play of life, somehow the sword just moves from the hands of the warriors towards its enemies and that all is karmically perfect and balanced. Taking any accountability and responsibility away from the warriors.

This is serious distortion here, as the very Hindu law of Karma states that one must do the action and be detached to the result. Not be lazy and nothing or be reckless with the wrong actions. It is evident that he is no scholar of eastern religion and philosophy and should refrain from commenting on it. As young people who admire Zizek, who don't read or take the time to research for themselves will take all of this as gospel being seriously misguided in their understanding of it.

Luckily, I doubt his admirers are looking to him for spiritual guidance.

I feel that both of them had an incomplete view of Happiness. The real goal of life is to attain spiritual bliss-, which only comes from Moksha- the liberation of the soul from the Ego and the idea that oneness, and love is all there is. They both take happiness more like pleasure or contentment or excitement in life rather than a deep- everlasting feeling that only comes from very deep spiritual work or truly fulfilling your Dharma- Purpose in life. So none of their statements really answered the question of this kind of real happiness.

Towards the end of the debate, both miraculously found merit in Christian values. Petersen's point was that the idea of individual responsibility stems from Judeo- Christian values. This of course is incorrect as the deepest level of individual responsibility would most likely come from Indic philosophy of Karma. The void of their knowledge of comparative religion comes across blatantly and does both of them a disservice in this discourse. 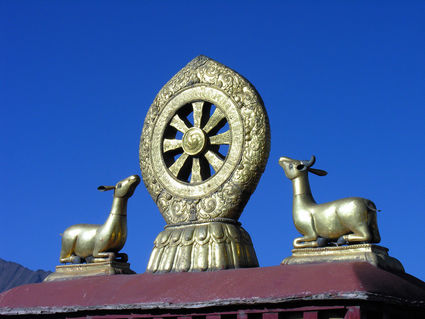 There was no real debate on Communism vs Capitalism with respect to happiness. Hopefully the lesson learnt here is that this was a futile exercise and one that wont be attempted in the future.