"Mexico is also taking decisive action to dismantle human smuggling and trafficking organizations as well as their illicit financial and transportation networks," 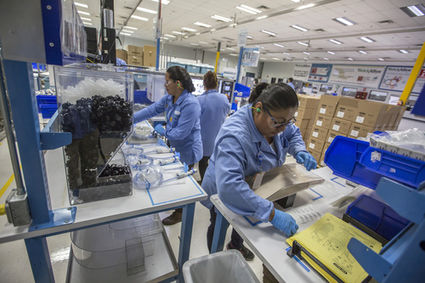 Workers pack medical products at a factory in the Mexican border city of Tijuana on June 4, 2019.

Washington (dpa) - The United States and Mexico reached a deal Friday on migration that avoids tariffs that would have been imposed on all Mexican goods starting Monday.

Under the deal Mexico agreed to take strong measures to stem the tide of migration through the country.

"This is being done to greatly reduce, or eliminate, Illegal Immigration coming from Mexico and into the United States," Trump said. "Details of the agreement will be released shortly by the State Department."

Mexican Foreign Minister Marcelo Ebrard also confirmed the agreement, tweeting: "There will be no application of tariffs by the US on Monday. Thanks to all the people who have supported us, demonstrating the greatness of Mexico."

Trump's proposed tariffs would have gone up progressively, from 5 per cent on Monday to 25 per cent later this year, had Mexico not complied with US demands that it prevent Central American migrants from crossing the border.

The immigration issues had been the focus of talks in Washington this week after Trump threatened to impose the tariffs in a surprise announcement last week.

Mexico has stepped up measures against migration in recent days, arresting two leaders of migrant caravans and deporting hundreds of people. It also froze the bank accounts of 26 people suspected of involvement in people smuggling and the organization of caravans.

The US State Department said the additional "unprecedented" measures Mexico will take include deploying its National Guard throughout Mexico.

"Mexico is also taking decisive action to dismantle human smuggling and trafficking organizations as well as their illicit financial and transportation networks," the department said in a news release.

The United States for its part will expand a programme for migrant protections across the US-Mexico border. This means that people who seek asylum will be rapidly returned to Mexico, where they may have to wait for a judge to hear their claim.

But Mexico will allow people to cross for humanitarian reasons while they await adjudication of their asylum cases, according to the release.

Ebrard, Mexico's foreign minister, confirmed the National Guard deployment throughout Mexico in remarks in Washington on Friday. He also said border checks would be strenghtened "significantly."

Ebrard said, however, that the agreement did not include the possibility of Mexico acting as a "safe third country," something that would have forced Central Americans to seek asylum in Mexico, rather than in the United States.

Mexico is one of the US' most important trading partners, for years ranking among its top importers and exporters. In the first quarter of this year, Mexico was number one, overtaking China and Canada.

Mexico exports some 3.6 billion dollars' worth of beer to the US each year.

Tomato and avocado imports from Mexico, combined, are worth some 4 billion dollars, according to the US Department of Commerce and industrial groups, as part of more than 10 billion dollars in fresh fruits and vegetables the US takes in from its neighbour annually.

Much of Mexican-US trade centres on automobile manufacturing, with complex production lines that see products crossing the border back and forth several times before completion.