If you planned on getting $5 today for those tin cans and old newspapers, forget it. 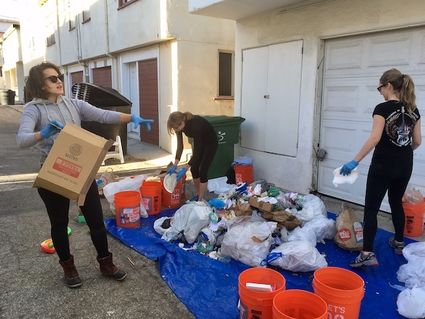 Recycling experts sorting waste in a Santa Monica alley in 2016

The City of Santa Monica has announced that the Recycling Center located on Michigan Avenue, has closed. The announcement was made on the City's website. https://www.smgov.net/uploadedFiles/Departments/Public_Works/Solid_Waste/Recycling%20Center%20Flyer%20060319(1).pdf

"The Santa Monica Community Recycling Center, commonly known as the Buyback Center, will close effective June 15, 2019, until further notice. The City is in the process of identifying an option to work with a recycling contractor on a month-to- month basis for processing recyclables during the short-term. Please note that there will be no immediate impact to solid waste rates."

The announcement directs people to recycling centers in Cheviot Hills and in Culver City, and notes that Santa Monica's curbside collection of trash and recycling will continue.

The crisis appears to be caused by a Chinese policy refusing to take other countries' trash. As the Deseret News reports, quoting Mark Hooyer, former director of the Trans-Jordan Landfill in South Jordan, Utah: 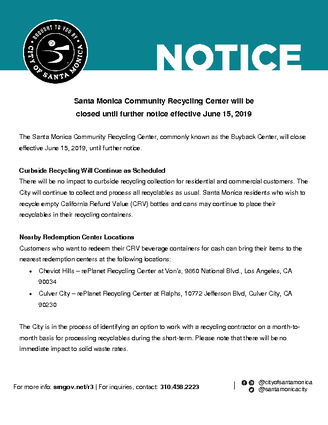 "People would be outraged if they knew this was the destination for their carefully sorted recycling," says Hooyer, who estimates that more than 40 percent of what Wasatch Front residents put in their recycling bins is being thrown away. Utah companies that sort and sell recycling offer a more conservative figure, saying up to 30 percent of what they receive from cities gets sent to the landfill because it can't be recycled.

But everyone agrees the percentage is significantly higher than it was a year and a half ago thanks to China's "National Sword" policy, which slashed the amount of foreign recycling China imports and sent destabilizing ripples throughout the world's recycling economy. Now, communities in every state are debating whether to pay the increasing costs of recycling, stop collecting certain materials or disband their curbside programs all together.

"The recycling industry is definitely in crisis," Hooyer says. https://www.deseretnews.com/article/900072861/paper-plastic-china-recycle-united-states-america.html