The aircraft will take off and land vertically from a network of "skyports." 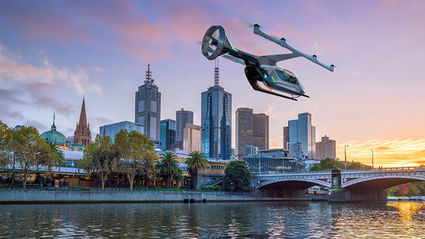 A supplied digital render obtained on Wednesday, June 12, 2019, of a proposed Uber Air aircraft. Melbourne will join Dallas and Los Angeles as the third city to test Uber Air flights from 2020, with plans for commercial operations to start from 2023.

Melbourne will be third city in the world, after Dallas and Los Angeles in the US, to trial the Uber Air service that will transport passengers using electric aircraft.

The trial flights will begin in 2020 and commercial operations are set to begin in 2023, Uber said in a statement.

The Uber aircraft will be accredited by Australia's Civil Aviation Safety Authority, which told ABC Radio Melbourne it would work with the company to ensure the service was safe before it started operating.

"This, coupled with Melbourne's unique demographic and geospatial factors, and culture of innovation and technology, makes Melbourne the perfect third launch city for Uber Air," she said.

Victoria's treasurer, Tim Pallas, said the state government would support the venture, but not provide any financial support.

The aircraft will take off and land vertically from a network of "skyports." The service could cut the 19-kilometre car trip from Melbourne's airport to the city centre by more than a third to about 10 minutes.

Uber is currently working on its aircraft with NASA and the US Army, along with manufacturers Embraer and Pipistrel.