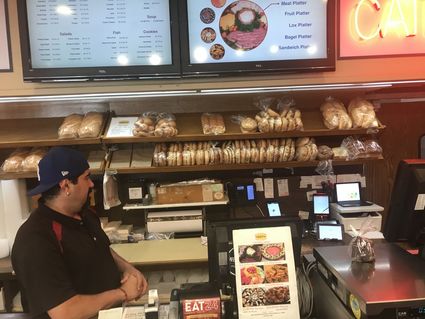 Juan with eight separate screens one for each delivery service.

Yogi Berra reportedly once said about a particular New York restaurant, "no one goes there anymore. You can never get a seat it's so crowded."

The opposite is apparently true at some local eateries: the culprit Karen: DoorDash, Postmates, Uber eats and the like. Such delivery services may add $5 or $10 to the cost of a meal. But using them means that diners don't have to wait in line, or drive to the restaurant at all. As a consequence, Juan at Izzy's Deli on Wilshire reports he has eight separate computer screens, and very few customers.

Such delivery services and add five or $10 to the cost of a meal, but mean that diners don't have to wait in line, park, or go to the restaurant at all. As a consequence, Juan Noah reports he has eight separate computer screens, and very few customers.

"We started out with just one or two, he says now I have eight tablets. It's not good for us because people don't come in to dine anymore." The result is a study in the law of unintended consequences. Online food delivery services through phone apps, have resulted in fewer tips and less for waiters and waitresses to do.

The Panda Express is no easy task lately, with all the DoorDashers and PostMates waiting to deliver meals. Like Uber or Lyft, it's a good way to download an app and earn a few bucks. At the expense though of local waiters and waitresses. 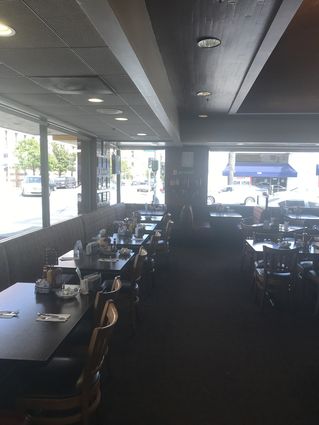 Postmates is an American logistics company that operates a network of couriers who deliver goods locally.

As of February 2019, Postmates operates in 2,940 U.S. cities. The service is part of a category of businesses that rely on mobile phone applications and their Global Positioning System capabilities to quickly match inventories and consumer demand.

Launched in 2011, Postmates pioneered the on-demand delivery movement in the US by offering delivery from restaurants and stores previously only available offline.

Postmates is an example of an on-demand company. Postmates co-founder Bastian Lehmann calls the company anti-Amazon. In June 2015, Postmates announced that they had surpassed 2.5 million deliveries across 28 markets and expanded their fleet to 13,000 couriers