The Politics of Pastrami: Fromin's Celebrating 40 Years, Signs Lease for the next 20 years

When asked what his favorite food on the menu was, Stein responded, "breakfast, lunch, and dinner!" 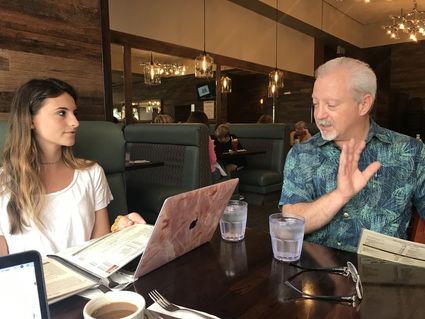 If you live in Santa Monica, you know Fromin's. Whether you're a regular at the deli or someone who simply drives past the restaurant on the way to work, you have most likely heard of this Wilshire Blvd eating spot. As a self proclaimed family restaurant, they have become a staple in the community for 40 years. Fromin's which first opened its doors in Encino was started by Dennis Fromin in 1962. At one point, Fromin's had four locations but has since decided to only have one location Santa Monica, starting in 1978. Fromin chose to open a location in Santa Monica for the traffic flow and sense of community that he saw in the area. When deciding on a spot in Santa Monica, Fromin knew he wanted an address on Wilshire Blvd.

The menu consists of over 350 items, with lots of healthy choices amongst salty and fatty deli classics such as pastrami and salami. When asked about the health choices, Fromins' general manager, Bruce Stein, explained that 99% of the food served is made on premises and is prepared fresh...even the salad dressing! He also explained that while Fromin's is known for their reuben, they actually serve a lot of turkey, even preparing 6-8 full sized turkeys daily. Stein also stated that while there are vegetarian choices on the menu, they would like to incorporate vegan choices in the future.

Stein, who married Fromin's daughter Lauren, has been part of the Fromin family since 1995 and has said that he is part of a "family of workaholics." Unlike Fromin who is 77 and still works everyday with the deli, either in house or at home doing paper work, Stein has only been part of the deli for the last 25 years. Previously, Fromin had a business partner, Maurice Soloman, who retired last year. Fromin's is now a completely family owned business which strives to have customers feel like part of the family too.

At Fromin's, at least 40% of the deli's customers are regulars, meaning those who dine there every single day. To add another staggering statistic, 95% of the servers have been with the deli for about 25 years and they even have two employees that have worked at the location all 40 years that it has been open. 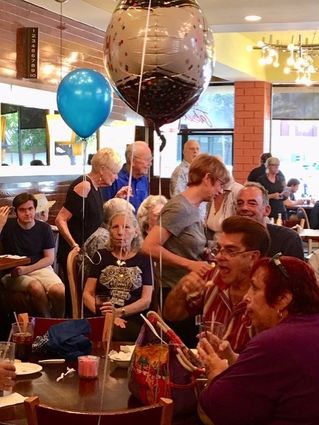 While many customers are regulars, Fromin's is still trying to find ways to cater to a younger crowd. Not only by adding healthier options or choices for specific diets, but also with drinks. Fromin's has a beer and wine license but does not have a liquor license. This has not stopped them though. There is now an expanded beer list and they have found liquors with a lower percentage of alcohol so they can serve mixed drinks under their beer and wine license.

Another change that is being embraced is the consumer's interest online ordering. Fromin's has systems in place to deal with orders from companies such as DoorDash and UberEats. Fromin's uses tablets to take these orders which has increased their take-out business.

While Fromin's has had a spot in the Santa Monica community for 40 years, they have recently renovated the interior and have signed a lease for another 20 years. They will be celebrating 60 years of business in 2039.