One of many aftershocks from July 5th earthquake 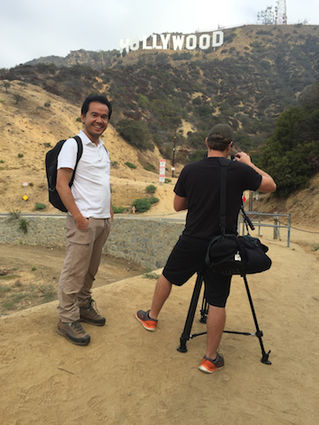 On Sunday afternoon at 12:40 pm PDT, many residents of Hollywood felt a small aftershock from the July 5th Earthquake.

On July 4, a 6.4 magnitude earthquake occurred at 10:33 a.m. PDT in a low population density area of San Bernardino County.

The earthquake happened during Santa Monica's annual 4th of July parade. Stilt walkers did not fall off balance, and few people seemed to notice it. On the other hand, residents in building reported swaying and the distinctive noise associated with earthquakes.

On July 5, a 7.1 magnitude  main shock occurred near the same location, at 8:19 p.m. PDT. It ranks as the most powerful earthquake to occur in California in 20 years

The temblor went on for over a minute. It was felt throughout the Westside of Los Angeles County as a powerful rolling motion. The quake was centered 12 KM southwest of Searles Valley California.

The swarm occurred approximately 85 miles northeast of the San Andreas Fault that runs the length of the State..

This quake was preceded by several smaller earthquakes, and was followed by more than 1,400 detected aftershocks. From July 4 to July 5, 2019, a series of earthquakes occurred between Searles Valley and Ridgecrest, California, between the southern boundaries of Sequoia National Park and Death Valley National Park.

Relatively minor damage resulted from the initial foreshock, though some building fires were reported in Ridgecrest near the epicenter. The main quake on July 5 cut the power to at least 3,000 residents in Ridgecrest.