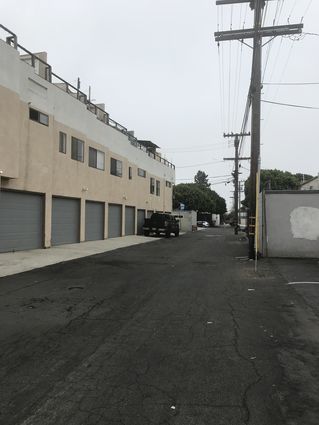 This Alley is the 2000 block of Lincoln Court

Early Sunday morning, Santa Monica Police were attacked by Wolfgang Mountford, 29, in an alley off Lincoln Blvd, near Grant Avenue. Police say the man rushed them, an officer pulled his sidearm and fired one shot which struck the man.

Fire department paramedics treated the man, who was taken to a hospital. Later he was treated and released. Police say they had encountered the same suspect earlier in the day. The press release from the SMPD is below.

Santa Monica, CA: On July 14, 2019 at about 2:11 a.m., Santa Monica Police Department (SMPD) Officers responded to a radio call for service in the area of 10th Street and Pacific Avenue regarding a male subject creating a disturbance.

The subject is identified as Wolfgang Mountford, a 29-year old white male from Van Nuys, CA. Mountford was booked at the Santa Monica Jail for 69 P.C. – Resisting an Officer with Force/Violence. The case will be presented to the Los Angeles County District Attorney's Office

The incident is under investigation by the Criminal Investigations Division of the Santa Monica Police Department. The Los Angeles County District Attorney's Officer Involved Shooting Response Team was notified and responded for an independent investigation. In accordance

with Santa Monica Police Department Policy in relation to an officer involved shooting, a concurrent administrative investigation has been initiated

Anyone with additional information is urged to call the Santa Monica Police, at 310-458-1491.