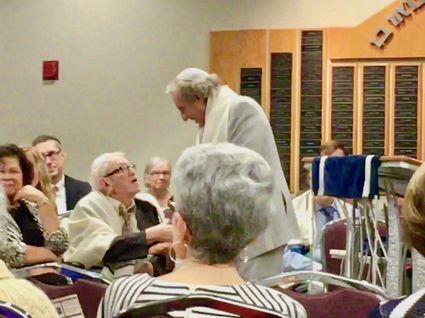 Editor's Note: Jack Nomberg died on September 5, 2019 at 101 years of age. We are reposting this story in his honor. Funeral services will be held on Monday, September 9, at 2:00 pm at Hillside Memorial Park located at 6001 W. Centinela Ave, Los Angeles, CA 90045. After the funeral, all are encouraged to return to Kehillat Ma'arav as a community. Refreshments will be served. Minyan will begin at 6:30pm in the Sanctuary.

He has lived for 100 years and in that time, escaped the Nazis, started a successful textile business, and funded a synagogue in Santa Monica. Mostly, Jack Nomberg is thankful for everything.

Nomberg was born in Poland in 1918, the year World War I ended. The battle lines shifted very little in that war, so when the Germans marched into Poland and took Warsaw in 2 weeks, most people were caught flat footed. Nomberg, then 22, went to Siberia, where he survived the war.

Later, he came to Ohio, then to California, where he went into the textile business. He married Goldie Nomberg, who died about 20 years ago.

Kehillat Ma'arav synagogue began in Brentwood Presbyterian Church. Around 1990, Nomberg donated the money to construct a building across 21st Street from Crossroads School. 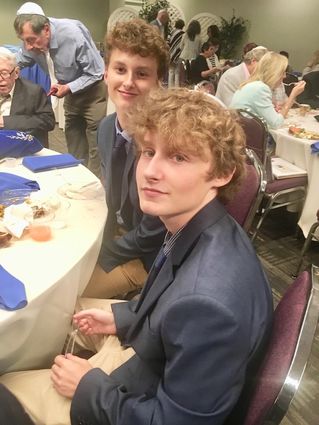 His son-in-law used to tell a story. Walking into a Chinese Restaurant one night, Jack ran into a colleague in the Shmata business. He spoke to the man in Yiddish. "what was that about?" asked the son-in-law later. "I just bought 4000 yards of velvet," Nomberg said.

Walking out of the restaurant, Jack ran into another colleague. Again, the conversation in Yiddish followed by "what was that about, Jack?"

Jack had one daughter, 2 grandchildren, and 2 great grandchildren: twins Will and Eric. They are high school students in LA County.

So. The natural question. How did Jack Nomberg live to be 100? What advice does he have for us?

"I have my own theory about that. Jack is very adaptable. He doesn't live in the past. Whatever happens to him or around him, he deals with it and moves on," said Jack's neice Sandy Kanengiser.