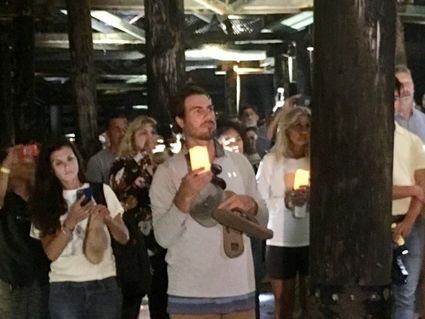 In lieu of Candles (too much of a fire hazard), friends hold cell phones under the Santa Monica Pier on Thursday 9/5/19, to memorialize 34 divers who died in the Conception Boat Fire off Santa Cruz Island on Labor Day.

Friends and loved ones gathered in front of the Santa Monica Pier aquarium on Thursday, for a memorial to those killed in the boat fire on September 2nd. 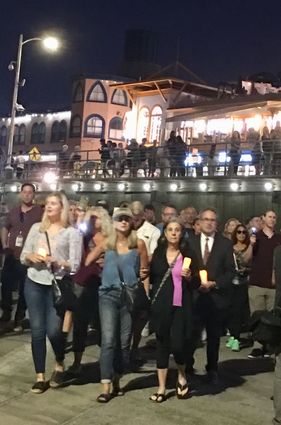 Memorial for 34 divers who died in the Conception Boat Fire off Santa Cruz Island on Labor Day.

Two of the 34 divers killed in the Labor Day morning fire were from Santa Monica: Marybeth Guiney, 51, and Charles "Chuck" McIlvain, 44.

"Heal the Bay extends its deepest sympathy to all of those who experienced loss in the destruction of the dive boat Conception out of Santa Barbara. Heal the Bay Aquarium and Eco Dive Center are hosting a gathering and fundraiser for the family, friends, and close knit community of divers affected by the accident," said the group in its invitation.

The Conception was anchored off Santa Cruz Island. Five crew members sleeping above deck were able to jump off the boat and survive, while 34 divers sleeping below deck died.

The cause of the pre dawn fire is under investigation, though the Coroner has said that recovered bodies appear to have died through smoke inhalation rather than in the fire itself.