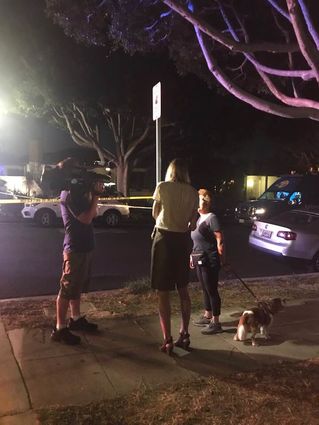 Burglary at 11th and Pine involved two homes, and turned into a home invasion, a barricade situation, and an officer involved shooting. Here a cameraman and two residents discuss the situation.

It was dinnertime last night on Pine Street, in what has been dubbed the "Ozzie and Harriet" neighborhood of Santa Monica.

A resident arrived home, to find an armed burglar in his house. As the robber pointed his gun at him, the resident ran out the door and called Police. While SMPD was enroute to the 1100 block, the burglar continued stealing items from the man's home.

But once he saw the cops, he fled the scene, and barricaded himself in the backyard of a home on Cedar. The family was home at the time, but managed to escape unharmed.

At this point, SMPD called in in the SWAT team, and reinforcements from other jurisdictions. Residents reported the scene as "surreal" as a phalanx of officers with guns drawn ran down 11th st. Meanwhile, parents at "Back to School Night" at John Adams Middle school said the low-flying Police and Media helicopters were drowning out the teachers in the classrooms. 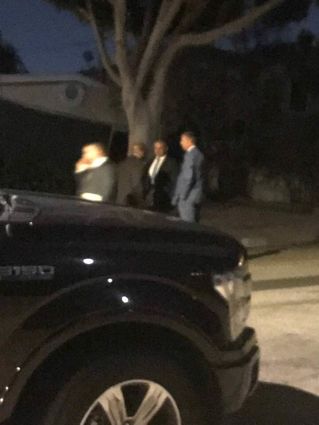 SMPD Detectives in Ocean Park after the shooting.

The principal came on the loudspeaker and said several local streets had been blocked off, from 10th to 14th, and Pacific to Maple. Some residents in the area were evacuated, while others trying to come home were not allowed inside the perimeter. One officer from Culver City said he was at the robbery of the Wells Fargo bank the day before, and did not expect to be called back to Santa Monica so soon.

Meanwhile, officers were trying to get the gunman to surrender, but he would not. Residents reported hearing three gunshots, Shortly thereafter, they saw the burglar being carried out on a stretcher.

A Police officer who was trained as an EMT went to work on him immediately, until the suspect could be transported to the hospital. The suspect, whose name has not yet been released, was shot once in the abdomen, and is expected to recover.

Several Police investigators from internal affairs were spotted at the crime scene, to investigate the officer involved shooting. It's just the latest in a string of burglaries, robberies, and other violent crimes that have plagued Santa Monica in recent weeks.