Report: Tyler Skaggs Purchased the Drugs that Killed Him, From an Angel's PR Team Member 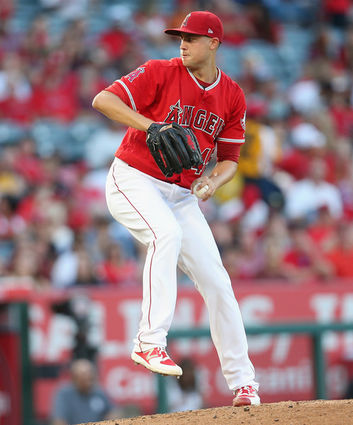 Tyler Skaggs on the pitchers mound. ESPN is now reporting that Eric Kay, a member of the Angels PR, supplied him with opioids. Angels continue to deny this, while Kay get lawyered up.

I was the first one to break the story that Tyler Skaggs secret opioid addiction, is what killed him in a Texas hotel room early in the morning of July 1, 2019. The Angel's denied that the star pitcher had died of drug overdose, even going so far as to send us threat letter from a lawyer. Angels' lawyers told us to "cease and desist" from telling the truth.

This from Angels PR person Marie Garvey to me on July 1, 2019: "Again, we do not know the cause of death and your headline says apparent drug overdose. This needs to change. In addition, you have now changed your story to opioids based on what facts? This is dangerous speculation based on no facts whatsoever and needs to be correct or pulled down. Please let me know that when this is done."

ESPN is now reporting that Eric Kay, a member of the Angels public relations staff, actually sold Skaggs the oxycodone on which he overdosed. Kay’s supervisor? Marie Garvey, the woman who wrote me and told me to take down my story.

From the LA Times:

The attorney for an Angels employee who reportedly provided opioids to Tyler Skaggs described the pitcher as "an addict who overdosed."

Eric Kay, who has worked for the team in media relations for 24 years, engaged Newport Beach criminal defense attorney Michael Molfetta nearly two months ago out of concern that he might be made a "scapegoat" in the investigation into the drug-related death of Skaggs.

On Saturday, ESPN reported that Kay told federal investigators he provided oxycodone to Skaggs and abused it with him for years.

Citing two people familiar with the investigation, ESPN also reported that two team officials were told about Skaggs' drug use long before his death and that Kay gave U.S. Drug Enforcement Administration agents the names of five other players who he believed were using opiates while they were Angels. Tim Mead, Kay's former supervisor with the Angels and now president of the Baseball Hall of Fame and Museum in Cooperstown, N.Y., is one of the employees implicated. https://www.latimes.com/sports/story/2019-10-12/angels-employee-eric-kay-provided-tyler-skaggs-opioids?utm_source=LAT+Breaking+News&utm_campaign=e2ddf2c538-EMAIL_CAMPAIGN_2019_10_12_10_38&utm_medium=email&utm_term=0_b3d39b0044-e2ddf2c538-85336085

It should be noted that the Angels officially continue to deny that one of their employees was involved in Skaggs death at 27 years of age. "We have never heard that any employee was providing illegal narcotics to any player, or that any player was seeking illegal narcotics," Angels president John Carpino said in a statement Saturday.

"The Angels maintain a strict zero-tolerance policy regarding the illicit use of drugs for both players and staff. Every one of our players must also abide by the MLB Joint Drug Agreement. We continue to mourn the loss of Tyler and fully cooperate with the authorities as they continue their investigation."