Chain opens second location in Santa Monica, the other being on Pico Blvd. 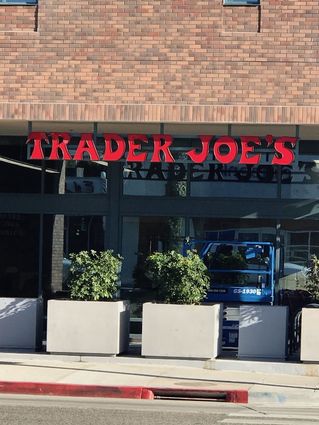 Trader Joe's new location at Wilshire and 23rd Street in Santa Monica. The chain of grocery stores is headquartered in Monrovia, California

Trader Joe's has installed a sign, for their new location they plan to open at 23rd Street and Wilshire Blvd in Santa Monica. This is TJ's second Santa Monica Location, after 31st and Pico Blvd.

The retailer has been characterized as "notoriously secretive" and has been criticized for a lack of transparency by management about the sources of products such as organic milk. On the other hand, many cheered the new grocery store, which sells largely high end, in demand items.

When the car wash at that location was torn down last May, there were rumors that the national grocery chain would soon draw a ton of traffic to the already crowded intersection, by opening a new store. The rumor now appears to be correct, as a Notice of Application to Sell Alcoholic Beverages sign has appeared at that location.

"It Could bring more cars, scooters, bikes and Ubers as well as garbage and delivery trucks + maybe rats and even hungry coyotes!!! On the other hand many residents will love a TJ's within walking distance and with better parking than the TJ's on Pico. Either way, similarly to the WF on Wilshire which surprised the neighbors this one is doing the same," said one local real estate agent.