The Dept of Justice ranks Santa Monica has the 3d Highest Crime City in Calif. in 2018. 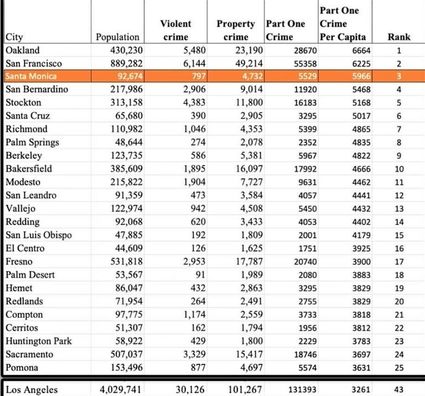 The report posits that on an adjusted basis, Santa Monica had 5966 Part One Crimes per 100,000 population, including property and violent crimes. SM beats San Bernardino, with 5468 crimes, in 4th place.

With all the construction and "densification" in Santa Monica, it could be that there are simply more people present in the 8 square mile city limits. In recent years, Santa Monica has become more of a core area, that people commit to work to in the morning, and leave in the afternoons to drive back home. More people does generally imply more crime.

Santa Monica Police Chief Renaud has written that crimes, both property and personal, are actually down this year to date in Santa Monica.

"For the year to date, we are experiencing a 15 percent decrease in our Part 1 crimes. These crimes include homicide, rape, robbery, assault, burglary, theft and motor vehicle theft. We have not seen a decrease like this in a few years," she says.

Renaud was commenting on 2019 to date, so her observations are not necessarily inconsistent with the FBI report.

"We are seeing a significant decrease in car break-ins and assaults which are areas that we typically see the most crime. For car break-ins, we are seeing a 17.5 percent decrease, down by 120 incidents from last year in downtown alone. The busiest parking structures are seeing reductions in criminal activity, which can be attributed to a few new changes we imposed, such as private security patrols and an intensified focus on our crime suppression missions," Renaud wrote.

An FBI press release, which is posted at https://www.fbi.gov/news/pressrel/press-releases/fbi-releases-2018-crime-statistics, says that:

For the second consecutive year, the estimated number of violent crimes in the nation decreased when compared with the previous year's statistics, according to FBI figures released today. In 2018, violent crime was down 3.3 percent from the 2017 number. Property crimes also dropped 6.3 percent, marking the 16th consecutive year the collective estimates for these offenses declined.

The 2018 statistics show the estimated rate of violent crime was 368.9 offenses per 100,000 inhabitants, and the estimated rate of property crime was 2,199.5 offenses per 100,000 inhabitants. The violent crime rate fell 3.9 percent when compared with the 2017 rate; the property crime rate declined 6.9 percent.

The DOJ crime report building tool, is at https://www.ucrdatatool.gov/Search/Crime/State/StatebyState.cfm