Of 9 Energy Star Certification Schools, none received a grade above "fair" with respect to "School Facility Good Repair Status" on their School Accountability Report Card. 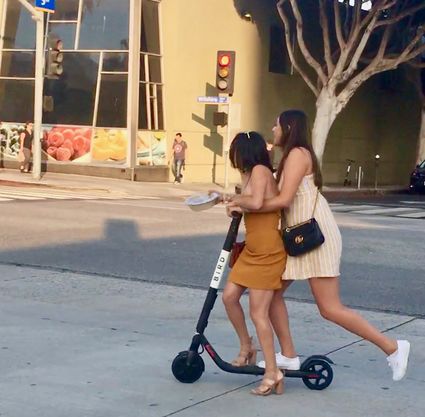 Two school girls riding a scooter just ain't right, and neither is the fact that Of the nine schools who won the Energy Star Certification, none of them received a grade above "fair" with respect to "School Facility Good Repair Status" on their School Accountability Report Card

Nine schools in the Santa Monica-Malibu Unified School District have won Energy Star Certification for 2018. To be certified, a building must earn an Energy Star score of 75 or higher. This indicates the building performs better than at least 75 percent of similar buildings nationwide, taking into account different operating conditions, regional weather, and other considerations. These standards are set by the Environmental Protection Agency. The EPA claims that Energy Star-certified building use 35 percent less energy, produce 35 percent fewer greenhouse gas emissions than buildings similar to them, buildings that, presumably, don't even try to be energy efficient. The EPA promises that the Energy Star buildings are less expensive to operate than the non-energy-efficient buildings.

Of the nine schools who won the Energy Star Certification, none of them received a grade above "fair" with respect to "School Facility Good Repair Status" on their School Accountability Report Card. Based on an inspection in November of 2018, each of the schools were reported to have peeling paint, multiple missing or stained ceiling tiles, lights not working, and various other inadequate or even hazardous conditions.

Bathrooms at various schools had problems that most students in the district are familiar with: toilets out of order, leaking sinks, and hand dryers that were either missing or non-operational. The boys' bathroom floors were in some cases found to be "excessively dirty." Again, not a surprise to anyone who is going to school in the district. In fact, I think the inspectors must have arrived on a good day regarding bathroom cleanliness.

While one might argue it's a nice thing for the district to try to save energy and reduce its impact on the global environment, it is more urgent and important to clean up the environment of the school itself. Children should be able to use a bathroom with working toilets and sanitary conditions. They should be able to have dry hands as they walk out the door. And they should have the safety of working, up-to-date fire extinguishers.

But the main objective of the school district is to educate children, not create energy-sustainable campuses. Of the nine schools who won the Energy Star certification, only three reached the same criteria as the Energy Star certification - over 75 percent - regarding students who met or exceeded Mathematics standards. Only five of them reached the 75 percent or above mark regarding students who met or exceeded English Language Arts (ELA) standards. 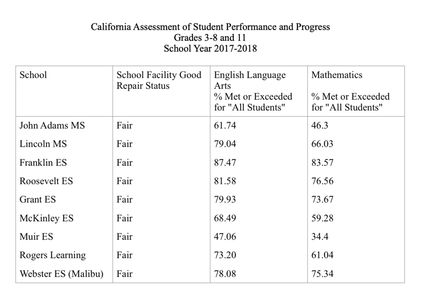 Chart of SMMUSD Schools and what percentages of them are up to par with their academics.

It is undoubtedly far easier to install energy-efficient bulbs and even solar panels than it is to educate children in a public school, with so many different backgrounds and who come from such a variety of socioeconomic situations. But the latter is the true work of the district.