No room at the Inn? Blame the Ninth Circuit and the Flying Spaghetti Monster 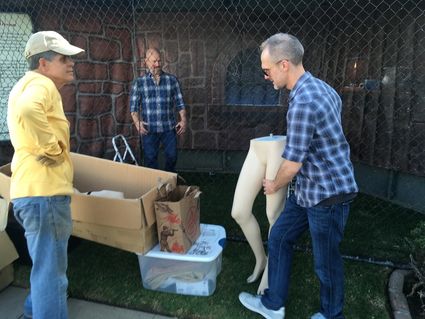 Churchmen erect the annual nativity scenes. The long battle over public displays of nativity scenes in Palisades Park ended in 2015 when a federal appeals court panel upheld a city ban against unattended exhibits.

The annual display of nativity scenes will return to Santa Monica this December, but they will be located on church property, rather than in a public park. Personally, I blame the Flying Spaghetti Monster. No, seriously.

In 2015, the Ninth Circuit ruled that the Establishment clause barring the State from establishing a religion, requires that the City hold a lottery to determine which organizations would be allowed to erect nativity scenes in Palisades Park.

Once the "Church of the Flying Spaghetti Monster" won the lottery to place a display in Palisades Park, it was over. Mary, Joseph, the Donkeys and of course, little baby Jesus were exiled to Church property.

This year, various churches sponsor a scene per church, on the grounds of First Baptist Church on Broadway and 20th Street.

The long battle over public displays of nativity scenes in Palisades Park ended in 2015 when a federal appeals court panel upheld a city ban against unattended exhibits.

Santa Monica residents began erecting large dioramas depicting the Biblical story of Christmas in Palisades Park during the 1950s. In 2003, the city decided that unattended displays would be permitted only in Palisades Park and only during December.

All members of the community were entitled to apply for a "Winter Display" in the park, and spots were allotted on a first-come basis.

But in 2011, atheists opposed to the religious displays deluged the city with applications and won a majority of the spots allotted. The Nativity backers and the atheists "both vowed to flood the display-space lottery with even more applications in 2012," the court said.

Rather than deal with the acrimony and the cost and time of processing so many applications, the city decided to end all unattended displays in the park.

The Nativity committee sued, and a district judge ruled for the city. The committee appealed to the 9th Circuit.

While the case has been in the courts, the committee has erected the displays on private property. A Lutheran church hosted them from 2013 to 2015, and this year, they are at the Baptist Church on 20th and Broadway.

"We just wish that people would respect the Christmas season and respect Christians for celebrating it, even in public parks where it has been a long tradition," said Becker, founder of FreedomX, which provides legal representation for conservative and religious liberty causes.

Hunter Jameson, chairman of the Nativity committee, said he was disappointed but determined that the scenes would continue to be displayed somewhere in Santa Monica. He blamed the loss of the park site on "a small group of out-of-town people who caused trouble." 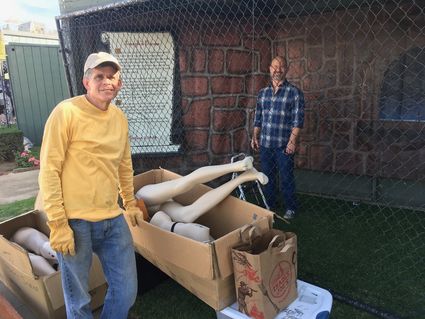 Churchmen erect the annual nativity scenes. The long battle over public displays of nativity scenes in Palisades Park ended in 2015 when a federal appeals court panel upheld a city ban against unattended exhibits.

In 1953, the chamber of commerce and a few local businessmen sponsored Nativity Scenes to draw tourists to Santa Monica benefit local business.  The Santa Monica city council even voted for the city to be known as the City of the Christmas Story.

Palisades Park, also known as "the Bluffs" was donated to the city of Santa Monica by the family of Ysidro Reyes, who had previously been the Mayor of Santa Monica.

Hey Fran, like it or not, our city is named after a Catholic Saint. Celebrating Catholic holidays is part of our cities culture and history. Denying or legally blocking our city from recognizing and celebrating it's history and culture is narrow minded and sends the wrong message to our children learning about their city's history.

This article is confused and inaccurate. The City of Santa Monica used to sponsor the Nativity scenes directly until the US Supreme Court made it clear in the 1980's that local governments had no business putting up religious displays for one religion. Santa Monica then went to the lottery system and allowed local churches or whoever won the lottery to put up the displays, most of which were Christian. This barely legal system lasted for several decades until one particular individual noticed the preference for religion and got most of the lottery spaces. No Satanists were involved. The City then decided to abolish the lottery rather than have to decide who got the spaces. Christians sued, but the 9th circuit upheld the right of the city to get out of the religion business. There is no reason to give so much public space over to one religion. Besides, I saw those displays, and I appreciate religious art, but the displays were not especially aesthetic.