The van travels to 10 cites a year, collecting stories from paired people 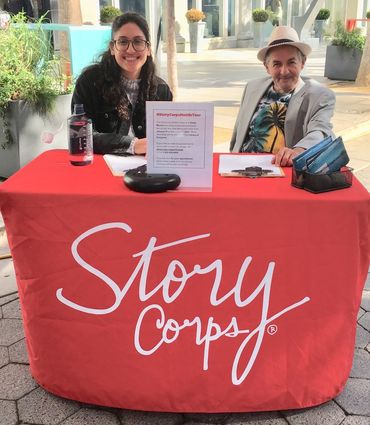 Slightly south of Wilshire Blvd on the Third Street Promenade sits a big silver van, with Story Corps scrawled in flowing red letters. A red metal desk sits near by.

When I arrived yesterday Mia Raquel asked if she could help me. A graduate of Oberlin College, she did radio there for 4 years and joined Story Corp in 2003.

Her responsibilities include taking care of the audio equipment in the van and making notes about the interviews for the archives.

The van travels to 10 cites a year, collecting stories from paired people. Their interaction is structured by a series of questions furnished by Story Corps. The stories that the production company finds interesting are edited and two are broadcast on FM radio for NPR on Friday mornings.

The participants are chosen by public appointments-it is possible to walk to the Story Corp desk and ask if they might be interested in recording a conversation.

One can also go on line and make an appointment. If there is a no show on the prearranged recording day, the staff will choose someone from their waiting list.

The interview is recorded in the silver van on the prescribed date.

Story Corp was founded by the Corporation for Public Broadcast, and the van will be on the Promenade for the next 7 weeks. Their press release reads as follows:

"StoryCorps, a renowned nonprofit organization celebrating the stories of everyday Americans, will record interviews in Santa Monica from January 6 to February 7 as part of its cross-country MobileBooth tour. Having collected over 80,000 interviews from Americans in all 50 states, StoryCorps has gathered one of the largest single collections of human voices ever recorded.

StoryCorps' MobileBooth-an Airstream trailer outfitted with a recording studio-will be parked on the Third Street Promenade between Wilshire and Arizona for 5 weeks. Reservations can now be made by calling StoryCorps' 24-hour, toll-free reservation line at 1-800-850-4406 or visiting storycorps.org. Additional reservation slots will open on January 7. 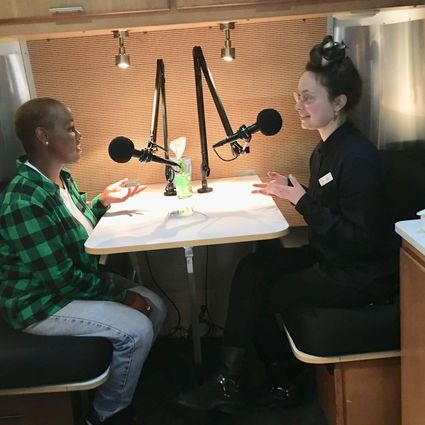 StoryCorps has partnered with KCRW, Santa Monica College & SMC Emeritus, and Downtown Santa Monica to collect 150 interviews with residents in the Santa Monica area. KCRW will air a selection of local interviews recorded in the StoryCorps MobileBooth and create special programs around the project. StoryCorps may also share excerpts of these stories with the world through the project's popular weekly NPR broadcasts, animated shorts, digital platforms, and best-selling books. With participant permission, all StoryCorps interviews will be archived at the American Folklife Center at the Library of Congress."