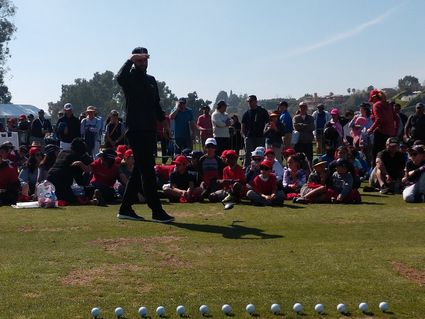 Josh Kelley of Hole in One Trick Shots, puts on a trick shot exhibition for some of the 600 Tee Off for Youth kids brought to Riviera by Genesis Motors to learn about science careers and the game of golf. The program also included a presentation by PGA tour professional Erik van Rooyen.

As Friday's play proved, this year's field for the Invitational at Riviera Country Club in Pacific Palisades may have the strongest field of any golf event for the year, having nine of the top ten players in the world rankings. The problem, for fans and Genesis Motors, is that the tough, long, and punishing Riviera course has a bad habit of turning away fan favorites after the cut. This year, though, the big names are mostly spared.

At the top of the list for most people hoping to see the top stars this weekend is Tiger Woods. Tiger started his first round by making an eerily appropriate eagle putt of 24 feet and 8 inches, recalling the uniform numbers worn by his friend and Lakers legend Kobe Bryant. That was only the second time in his career he started a round with an eagle and it seemed like he was on his way to a memorable tournament.

Tiger finished the first nine after 31 shots, and was on pace for a course record, until he lost momentum on the back side and added 38 shots on the back nine for a 69. Friday he again started with a birdie on the short 10th hole, but played the rest of the way in three over par. Not what Tiger hoped, but he will make the cut and has a habit of charging into contention on the weekend.

There is nothing like a Tiger charge, and the stage is set. For the rest of the top ten, things are less certain.

Newly minted world number one Rory McIlroy, who returned last week to the top spot for the first time since 2015 despite taking the week off, also eagled hole 1 on the first day. He added another eagle on the long and uphill 17th hole, then backed up his first day 68 with another strong round on Friday. He is certain to make the cut and is just a few shots out of the lead.

Ranked right behind McIlroy is the burly Brooks Koepka, who has made a reputation as a big player in the Majors. So far at Riviera he was steady but not spectacular with his first round 69. On Friday he was anything but steady, recording only four pars through his first eleven holes, but offsetting bogies and a double bogey with enough birdies to stay clear of the cut line.

Spain's John Rahm, world #3, looked anything but in form as he lurched through the first round, but found a groove in the second round to post a 68 that put him at four under and just outside the top ten scores.

However, #4 Justin Thomas, who had been leading the Fedex Cup Championship points race and is fifth in the world rankings, encountered Riviera's surly side. After rounds of 74 and 71, he has been stung by Riviera and missed the cut. Less-known UCLA product Patrick Cantlay fared better, validating his #6 ranking by following up a 3-under opening round to sit right with Koepka two shots behind Rahm.

Also looming is former #1 Dustin Johnson, who continues confounding golf experts by ranking #5 in the world despite playing well below expectations. Golf's enigma has continued to look great and play well at Riviera, correcting a 1-over first round with a three-under on the first two holes of his second round to finish tied with Cantlay and Koepka in prime position. Where he goes from there is anyone's guess.

#9 Xander Schauffle and #10 Justin Rose went their separate ways at Riviera, with the American Schauffle scuffling to sit just above the cut line, while England's Rose pounded out eight birdies through the first two days to hold a spot with Rahm.

The whole field is chasing #20 Matt Kuchar, who lapped the field in the first round by recording a 7-under par 64. Cooler on Friday, he has nevertheless avoided trouble to add to his lead, beating fellow Americans Harold Varner III and Russel Henley by two strokes. 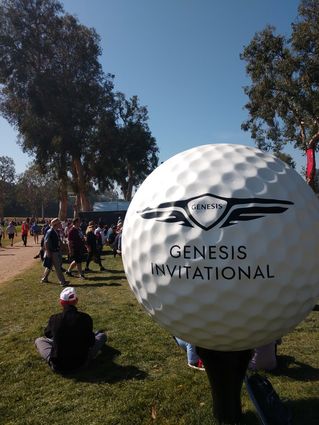 New this year: the Genesis Invitational has added a number of picnic benches to the grounds at Riviera for use by the patrons.

Avoiding trouble is not part of fan favorite Phil Mickelson's game. Phil, striving to return to the top 50 world rankings, is following up his strong showing at Pebble Beach with a typically roller-coaster round, offsetting brilliance with double bogies. Unfortunately, "Phil the Thrill" will not be on display this weekend. After a disappointing 72 in the first round, he suffered a crippling run of bogeys Friday in the middle of the front side and needed to close the last two holes in 3-under to make the weekend.

Even without Phil, Riviera is a course that poses an epic challenge to the top players in the world, and eight of the top ten will fight it out with Kuchar and the rest of the field for Sunday's trophy and the $1.67 million top prize. Tickets are available daily, and more information can be found at genesisinvitational.com.