Leafies and Weedies and Rubies, Oh My! – Glimpses Behind the Scenes at Birch Aquarium

Meet the tiny plesiosaur lurking in underwater meadows and the 20 cm dragon that eats newborn horses! 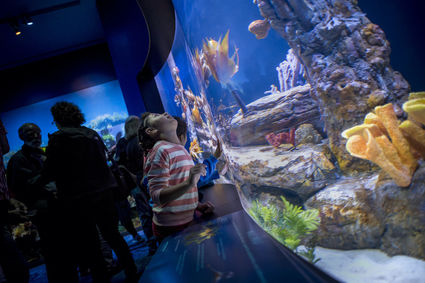 Kids admire the enchanting exhibits at the Birch Aquarium.

Anyone who thinks the world has been combed over and all its mysteries have been figured out should take a plunge into the ocean. Even today, NOAA declares that over eighty percent of our ocean remains unexplored. (https://oceanservice.noaa.gov/facts/exploration.html) And you don't have to dive particularly deep to find questions no research has yet been able to answer. Many such questions linger around the seahorse's relative, the seadragon.

Until recently, there were only two known species of seadragon, both living only in shallow waters off Southern Australia. The leafy seadragon (Phycodorus eques) looks like an intricately constructed fantastical creature, cut from yellow diamonds and confetti to create a thin, winsome face, a curvy body, and numerous appendages from the body and head that are dead ringers for living seaweed. The weedy seadragon (Phyllopteryx taeniolatus) is less flashy-looking but just as weird as its cousin: it resembles a tiny plesiosaur with its paddle-like appendages that disguise it with the seaweed of the meadows and reefs where it hides. While these animals are fascinating and weird, they don't seem to get as much research funding or as many scientific eyeballs as some more well-studied species, such as the seahorse.

But perhaps it's time for that to change.

In 2015, Josefin Stiller and Greg Rouse of UC San Diego's Scripps Institution of Oceanography, working with the Western Australian Museum's Nerida Wilson, noticed that some dried-out old "weedy seadragon" specimens from the Museum didn't quite fit into the range of anatomical and genetic variation known to exist within the species.

The researchers began sequencing the incomplete DNA fragments from the long-dead creatures and found what appeared to be an entirely new species of seadragon. But no one had ever reported observing these animals alive in their natural habitat, and it wasn't clear what they actually looked like while alive (the specimens available had stubs instead of leafy or weedy appendages, but it was unknown whether this was due to the delicate appendages being damaged during collection or bitten off or for some other reason.)

In order to further scientific knowledge of the species and its environmental needs, the researchers needed to find and observe them in the living flesh.

In the hopes of doing just that, Rouse and Stiller worked with Total Marine Technology in 2016 to put a Remotely Operated Vehicle (ROV) underwater to depths beyond where normal researchers could SCUBA dive. Eventually the investment of time, money, and patience was rewarded. (An excerpt of their video can be found here: https://www.youtube.com/watch?v=Bp5w4HjoaJM&feature=youtu.be).

Finding that the living fish sported a jewel-red coloration, they dubbed it the ruby seadragon. "The discovery showed us that we can still find big, charismatic, bright red fish that no one has ever seen before," says Josefin Stiller in a video: https://scripps.ucsd.edu/news/research-highlight-researchers-capture-first-glimpse-ruby-seadragons-wild.

These animals, scientifically known as Phyllopteryx dewysea, live in waters deeper than 50 meters, in contrast to the two more familiar species. And, perhaps even more shockingly, rubies totally lack the characteristic appendages that leafies and weedies rely upon to camouflage themselves from faster-moving predators. Like the preserved specimens, the living creatures have only knobbly stubs at the junctures of the body from whence elaborate appendages would normally flourish.

To further confuse matters, rubies have prehensile tails, a distinguishing feature of seahorses that is distinctly missing from the two previously-known seadragon species. So how many turns did evolution take to get to where we are today? Did leafies and weedies lose their appendages and (re-)gain prehensile tails for gripping holdfasts as they moved deeper, or vice versa, or was the evolutionary split back at the fork in the road between horses and dragons? Why do rubies live so deep down, and what advantage does this bring them? How are they affected by human activities?

We don't even know much about how human activities are impacting the two previously known genera, listed as "Least Concern" on the IUCN list due to lack of data.

"There are so many questions we don't know the answers to, and not enough people researching these questions," says Leslee Matsushige, head of the Birch Aquarium's department of sygnathids (the group that includes seadragons, sea horses, and pipefishes). The Birch Aquarium is the public facet of Scripps Institution of Oceanography, and has long been renowned for its pioneering innovations in sygnathid husbandry. Along with being one of the world's first aquariums to maintain successful seadragon exhibits, Birch has led the way in such care practices as using the circular tanks originally invented for sea jellies in order to prevent fish from being injured against the angular corners of a typical cube-shaped tank.

Birch also figured out how to ship seahorses around the world with a 99% survival rate, a crucial practice for breeding programs to maintain genetic diversity in their captive populations. This very month, February 2020, saw the first successful birth of two weedy seadragon babies in Birch's Seadragon Propagation Program (see https://aquarium.ucsd.edu/conservation/our-work/seadragon-breeding-programs for more info.) Still, Matsushige notes with chagrin, the leafy seadragons remain stubbornly unprocreative. At the idea of baby leafies, Matsushige's eyes sparkle. She smiles despite the sadness that Birch's breeding program has not yet successfully multiplied the leafy seadragons.

When I admit that not everyone in my entourage is as interested in marine life as I am – that, in fact, my brother warned me not to waste my time on this excursion because "seadragons are boring and don't do anything" – instead of finding this upsetting or depressing, Matsushige sees a glint of possible opportunity. "Sometimes it takes someone from far outside the field, someone who maybe doesn't even care about the subject, to come up with that crazy out-of-the-box idea that scientists who've been trying to get them to breed for decades never would have thought of.

Sometimes when you ask someone, and they say, 'Well, I don't really care about these fish, but I would do such-and-such,'" and a light bulb goes on in the researchers' heads and they're like, 'Yeah, that could really work. Why didn't we think of that?'" I decide I should ask for my blasé brother's opinion once home.

Other highlights of my interview with Leslee Matsushige include the extremely controversial question that's been gnawing at the back of my mind for ages. "Some people on the Internet say that, when a male seahorse is giving birth, if the babies come close enough to his snout, he might slurp them up and eat them. But other people on the Internet say 'No! Never happens.'" Matsushige tells me that in her extensive seahorse breeding experience, she has never observed a pregnant father aspirating his own babies as he puffs them out of the pouch on his belly. However, she does remember one occasion where a pregnant male seahorse was in a tank along with a seadragon.

The seahorse went into his intense labor convulsions and, with great effort, spewed out hundreds of fry. The seadragon, hanging out casually a few paces away, slurped up a baby-seahorse milkshake fresh out of its father's pouch. This, however, is one risk taken into account in the seahorses' evolutionary plan: they have hundreds or even thousands of babies per pregnancy and get pregnant several times a year, in a classic example of overproduction. This reproductive strategy compensates for a dismal survival rate typical of small fish: about 0.5% of seahorse young will make it to adulthood. Even in the enclosed tank, a fair number of seahorse fry did manage to get away due to sheer density: a dragon can only drink so many horses before s/he gets satiated.

"Is there any anecdote you can tell me, something really cool or gross about seadragons, that might shock my brother into being interested in them after all?" Matsushige finds this humorous. After a momentary brain-racking, she comes up with this: Occasionally sea lions will use seadragons as volleyballs in their sporty games. The seadragon is not designed to be able to swim away or fend off the pinniped, so if the sea lion looking for a toy gets past the camouflage, the seadragon has no real choice but to allow itself to be tossed amongst toothy mouths at the surface. The dragon can be damaged or killed by this sporting experience, but oftentimes their boney plates are strong enough armor to protect them from fatal puncture wounds. "We think of these creatures as being so delicate – and they are – but they're also really tough and can stand up to a lot of challenges that get thrown at them in the wild," Matsushige concludes.

While I'm at the Birch Aquarium, I also hop on a Behind-the-Scenes tour where visitors get the privilege of seeing some of the "backstage" work involved in taking care of seahorses and their relatives.

After feeding mysid shrimp to grateful Pacific Seahorses, feeling the humid heat of the nursery, and watching a demonstration of how aquarium experts safely package live seahorses in boxes to fly between facilities around the world, I feel like I've certainly had the full sygnathid experience.

There's only one thing left to do. When I get home, I ask my disinterested brother Leslee Matsushige's question: "If you had to come up with an idea to get seadragons to reproduce in an aquarium, what would you do?" His answer was disappointingly mundane: "I'd make sure they have the right water temperature and enough food to eat."

"Come on, I'm trying to get a good button to put on the end of an article here!" 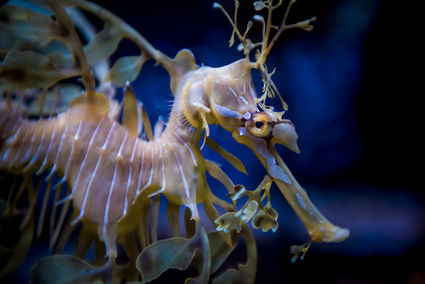 "So, what, you want me to say something ridiculous? Okay, fine, maybe give them a romantic picnic or something."