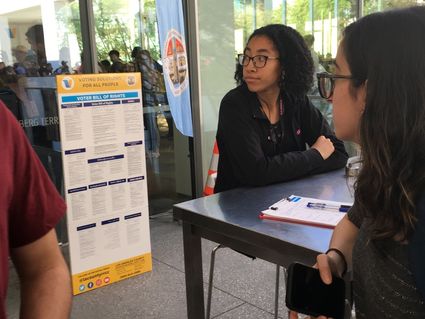 Unhappy voters and poll workers had to wait for hours in LA County, comparing wait times to 405 gridlock.

Last month I wrote that California should wait before laughing at the Iowa Caucus debacle. The state decided that the voting method that had worked seamlessly for over a century should be changed for something new and improved. Whenever a government entity uses those two words, perhaps adding “streamlined” and “transparent,” you can be sure they are only looking to cheap out. Or obtain some kickbacks from the “improver.”

And one can only assume that’s exactly what happened in California on Tuesday. Miserliness and graft.

For over a century, the state has provided local precincts where citizens could walk to vote. Since there were a limited number of people who could vote at each precinct, which were numerous and spaced in neighborhoods according to population, lines were kept limited for most elections. Other than mail-in ballots, all voting took place right on election day. Results were tabulated quickly, with candidates and measures usually determined that night.

But our progressive state decided that wasn’t good enough. To date, I have not seen the Secretary of State divulge a reason for vacating the numerous neighborhood precincts in favor of far, far fewer “voter centers.” It was utterly predictable and completely understandable that long - extremely long - lines were going to be experienced on election day. People were waiting over an hour to vote. Some dropped out of line, giving up.

And they should never happen again.

The government does way too much in the way of making our lives difficult. Every time we turn around, the government wants to regulate our actions. The state government dictates the education our children receive, they specify the kinds of showerheads we can use, and the font on the milk carton we buy at the grocery store.

None of that should be the business of the government. It was never intended to be the business of government. The only business government is supposed to engage in is to “establish Justice, insure domestic Tranquility, provide for the common defence, promote the general Welfare, and secure the Blessings of Liberty to ourselves and our Posterity,” as clearly stated in the United States Constitution.

One of the few true jobs of our government is to run elections. (Part of establishing justice and securing the blessings of liberty.) This means that the hard work should be done by the government to make voting easy and accessible for citizens.

The government should not impose the hard work, inconvenience, and unnecessary advance planning on its citizenry.

A request for a mail-in ballot had to have been RECEIVED by February 25. Not just postmarked. Received. It was up to the citizen to make sure the post office got it to the County Recorder in time.

People should not have had to choose between voting early at one of the voter centers and waiting until they could actually vote for a candidate who was still in the race. Pete Buttigieg and Amy Klobuchar, both attractive Democratic presidential candidates, dropped out of the race, Buttigieg on Sunday and Klobuchar on Monday - mere hours before polls opened in California. This late change in the lineup certainly hurt the similarly moderate Joe Biden and thus assisted the radical leftist Bernie Sanders. 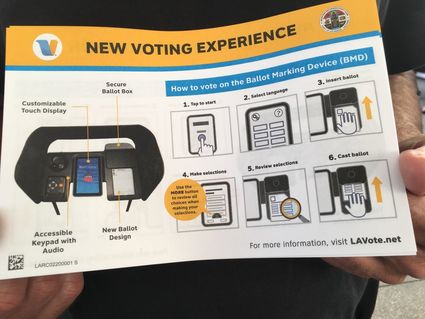 "New Voting Experience". Is that all understood?

It’s amusing that Sanders wants to sue California over the long lines. He benefited enormously from the ‘prudence’ of those Buttigieg/Klobuchar voters who’d voted early. These voters did not have a chance to realign their votes with the new information that came out over the weekend. Instead, their votes were wasted.

No vote should be wasted.

That sin is on the State of California.

No citizen should drop out of line because lines are unbearably long.

That sin is on the State of California.

Nobody should have to carefully research the voter guide to figure out what obstacles the government is putting in their way to prevent them from being able to vote in a timely, informed manner.

All of this is on the State of California.

What a disaster. NO government understands the meaning of: If it ain't broke, don't fix it. Government produces nothing, but continues to steal from the people with never-ending new taxes and constantly create imaginary problems it needs to allegedly fix in order to justify its own existence. The government that governs best governs LEAST. It's that General Welfare clause in the Constitution that's caused America so much grief over generations because it's so broad that it gives government wide latitude to interfere in virtually every fact of our lives, for our welfare, of course. Interestingly, when the Confederate States of America seceded from the union in 1860, they drew up a Constitution very similar to the existing US Constitution but without the General Welfare clause.